Well the answer is yes, it probably did but this should not actually matter. The reason for this is two fold. The first is that the flower pot does not have to take a lot of weight, a small amount of charcoal and a full crucible are probably still a lot less than it’s normal load of wet soil. The second reason is that the whole flowerpot is surrounded with mortar, at this point it’s about 30mm thick. 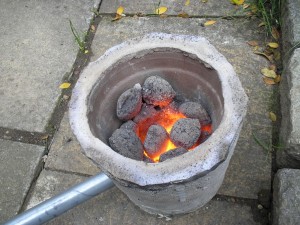 When constructing, I followed the instructions from the Back Yard Metal Casting book on the flower pot furnace. I made a couple of changes. The first was that my outer “can” was in fact a fine wire metal waste paper basket. The second was to do with this hole. I could not work out how it was going to be drilled after the mortar was added so I drilled my first using a tile bit and cut one in the basket using some snips. This gave me a new problem of how to line up the two holes. I solved the problem by adding enough mortar in the bottom of the bin so that the flowerpot could be added, I then used some rolled up cardboard to span the two holds and packed the rest of the mortar around then. After a few hours of drying, I removed the card and increase the size of the hole so that the air pipe would easily fit.

The hole in the bottom of the flowerpot is blocked up with mortar and a piece of angle iron with extra holes is laid across the pot so that it can spread the flow of air. A couple of blobs of fireclay give the crucible something to sit on. The air enters from the bottom of this photo. 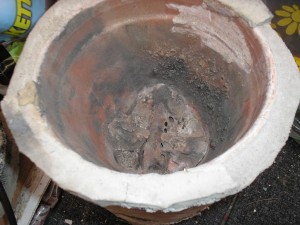 My other change was not really intentional in that I added a new top to the furnace following the main construction so that it was level. Retrospectively, I’d have made more effort to ensure that this lip was part of the main pour. The top edge has now cracked off in just two melts. I’ll give the furnace a good soaking (in water) before I try to put some new mortar on, as that should increase the bond.

The top edge of the furnace has undergone further repairs and so far is holding firm. The lid has had additional fireclay added when cracks had developed and fireclay has also been smeared onto the small cracks in the flowerpot. This is actually quite a normal process on such furnaces.