The latest mini project is the making of a doughnut shaped ring in 3mm sheet aluminium. The inner diameter is 54mm and the outer diameter is 70mm. The outer edge needs to be rounded off. The part is to act as a cover for a hole in some tiles around a shower attachment. Not quite sure what to call this, but have settled on bezel even though that’s not quite right.

When I heard the dimensions, I immediately knew it was going to be a problem. The lathe’s small chuck would never be able to hold such an item on it’s outer rim. Hence the order of construction needed to be to first to bore the middle then to hold the ring from it’s internal diameter to finish the outer rim. The starting point was a rough square of aluminium slightly bigger than the end size of 70mm. This was a cast off from an older project, I believe it’s the part of a panel for a rack mounted computer. A bar for work holding was also required, this was a simple piece of mild steel bar from a builders merchants. 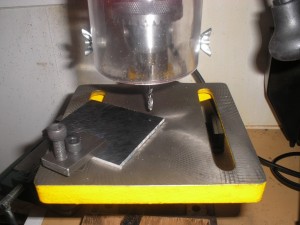 A 4mm hole was drilled in each end of the bar. A line was scribed along the diagonal of the square, the bar was placed along that line and the holes in the bar were drilled through into the sheet. The work was held using the one T-Nut and clamp I’ve made so far. The bar was then remounted using some 4mm bolts with extra nuts to form spacers. These nuts needed to be tightened at least one during the boring operation. You will notice that I had to remove the corners of the work so that it would rotate in the lathe. The bar was clamped in a 3 jaw chuck with a second piece about the same size, this moves the centre of rotation to be approximately the same as the centre of the work piece. If I’d had a 4 jaw independent chuck, I could have used that to centre the work. 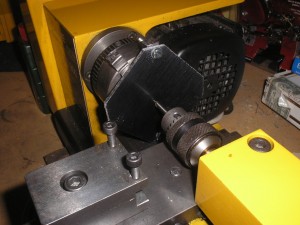 The work was centre drilled then drilled out in steps to the largest drill that fits in the lathe. In this case I have an ideal drill which fits into the MT2 tail stock directly. This is sufficiently large to allow the boring tool to enter the work. Adjust the boring tool so that there is sufficient space between the work and the cross slide. When you move the tool into the work that is being bored you don’t want the cross slide to crash into the work. The work was then roughly bored out to about 52mm. 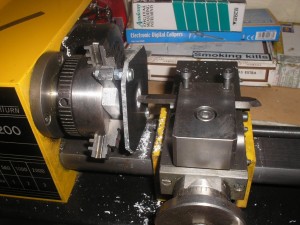 And then more carefully out to 54mm as required. You can see in this photo how the extra packing moves the bar back into the centre of the spindle. The work piece is then removed from it’s support bar and remounted in the lathe using it’s inner diameter. I decided to try the trepanning technique again as I was using a softer material and it was less likely to cause problems compared to the stainless steel washer that I first tried this technique on.

Trepanning needs a knife shaped tool similar to a cut off tool. To you might need to grind a tool that is appropriate. Once I was about half way through the work, I flipped over the disk and remounted on the other side. When the work was nearly through I took the work off and broke it out of it’s surroundings. Theses two steps stops the tool jamming and reduce the risk of the surrounding metal flying off the lathe. For more details on trepanning see Model Engineers Work shop 136, article by John Slater called “Making Solid Swarf”. The final steps are to machine the outside to size, remove the black paint/annodising and machine a curved profile onto the outer edge. I don’t expect any trouble with those.

Given that this work is to be mounted in a bath room, consideration is needed to galvanic corrosion. If this metal was placed next to steel then it would corrode quickly around the area of contact. For this reason I suggested the bezel was lacquered before installation.

One thought on “Bezel making”