I’d like to start with an apology to the Danish and English Royal Families. In an earlier post about cleaning out the shed, I suggested that the location of the 2009 model engineering exhibition was Alexander Palace, when it is of course Alexandra Palace. No offence was intended to Princess Alexandra of Denmark or any of her descendants.

I managed to visit the exhibition on Saturday. Luckily we travelled by bus as the exhibition space had been double booked with another event and hence all of the car parks were full. It was located in the great hall as usual and there was a good selection of stands present selling a wide range of tools, kits and materials. There were lots of models and three large railway layouts. Down by the organ there was a steam railway, tanks, planes and a science bus.

For me this was mostly a shopping trip, I managed to find most things I was looking for and hopefully saved a bit of money at least on postage. I did have to search quite hard to find someone who could sell me some lumps of steel but I found one behind a big crowd of people who sold by weight. I unfortunately could not get a small independent chuck but one supplier gave me a free ruler with a web address on the back so I bought one from them via web when I got home. I now have all the bits I need to complete a knurling tool which is now my next project. I also picked up a larger gas torch which will allow me to strip off the paint on some old garden gates and to braze back on the latch which I had to remove because it was rusty. 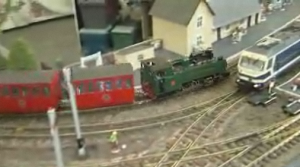 The BBC attended the exhibition on Friday and got some good video footage of the model tanks, boats and trains. Howard Benson also interviewed a selection of people at the London Model Engineering Exhibition.

One thought on “Ally Pally”