At the show earlier in the month I was looking for a 4 jaw chuck but failed to find anything small enough. I managed to get one online for a very good price, one of the jaws is a bit stiff but it clamps very well.

When I was casting the beta last year, I kept the riser (in the middle of the picture below) as a potential aluminium rod that I could use. 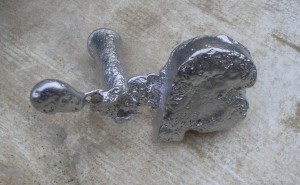 This was a very strange oval shape with a taper to one end. Four flats were made around one end and I clamped it in the 4 jaw independent chuck and roughly aligned it to a centre in the tailstock. The rod was turned down until most of the surface lumps and bumps had gone. After swapping back to the 3 jaw self centring chuck, I machined down the other end. 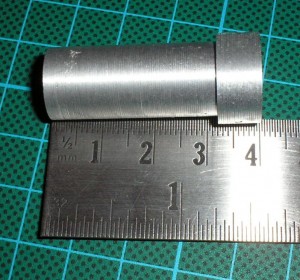 The material machined very well and produced a good surface finish. I’m sure that I will be able to produce an even better surface finish on it when I come to actually use it for a project. The hole in the photo above is from the surface and is not a defect internal to the metal.

One thought on “More blobs to blocks”