Thanks to a few days off and some nice weather I’ve managed to replace the side of the workshop. The old side was made from corrugated plastic sheet, which had perished badly in the sunlight. It was very brittle and had already developed some cracks. 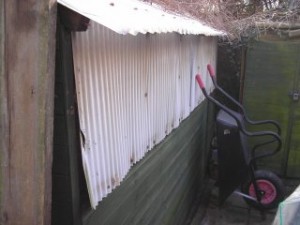 Whilst I was stripping off the plastic my neighbour commented that one of the previous owners was a painter and had used the shed as their studio which could account for why there’s the novel clear plastic roof. He was not sure of the exact age but the shed had been there when he moved in which was many years ago. 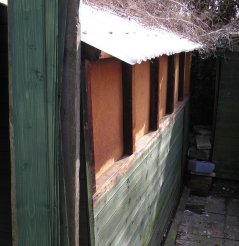 I’d decided to replace the plastic with tongue and groove to match the wood lower down the wall. I bought 10 of 9mmx94mmx2.4m, and have a spare plank. The cost including delivery was less than £20, another £10 for a 9L can of preservative. I plan to give the rest of the shed and the fence a coat too. Before installation, I gave the backs of the planks a couple of coats and the tongues and groves a coat two.

I already had some suitable 30mm pins to attach the wood. Rather than using the “secret nailing” process as shown below, I moved the nailing point a little further away from the tongue. This still has the advantage that the nails pull the planks together but reduces the risk of splitting the wood. Alternatively you can predrill the wood but that’s rather a lot of effort.

Here’s a work in progress shot with one coat of preservative. Hopefully will have the finished result in another day or so. 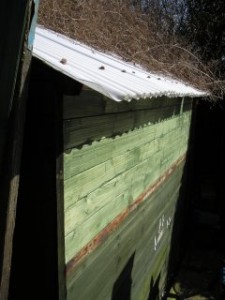 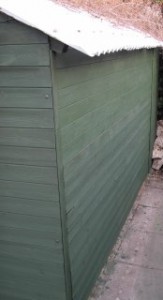 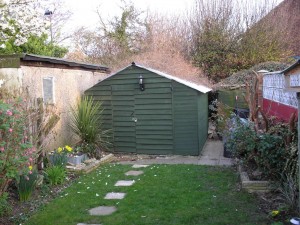 One thought on “Replacing the cladding on workshopshed”