Over the Easter weekend I was doing some gardening, i.e. chopping things up. I realised that the bush I was cutting up would make a good handle for the saw I was using. 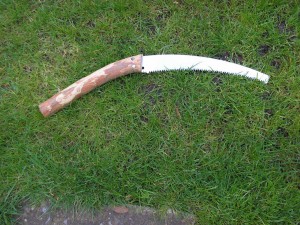 The saw blade was from some telescopic loppers but it was a bit hard to manipulate a saw on the end of a 2m pole so I’d just been using it with some thick gloves which was far from ideal.

A 14in by 1.5in section was cut from the bush and a slot was cut in the end using the saw blade. Any rough bits were removed with a surform. A couple of holes were drilled and the blade was bolted in place with some M5 bolts. I added a bit of packing so that the blade did not move. It’s likely that as the branch dries out I’ll need to tighten up those bolts. It’s also possible that had I made the slot a little longer then I would not have needed the packing. A final touch was to add a screw eye to the end so that I could hang it up in the gardening cupboard in the workshopshed.