For the knurling tool I’m making I decided to attach a couple of the parts together with some countersunk screws. 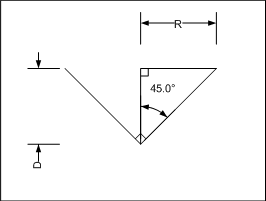 This raised the question of how do I ensure I’ve drilled it the right size?

Conveniently in the UK the Din 7991 standard for countersink bolts has a 90° angle hence the calculation turns out to be simply that the diameter produced is half the depth drilled. This is the depth with the drill bit resting on the surface, not with it resting in the hole.

So for my M5 bolts I need to drill down 5mm to get a 10mm diameter hole for the heads.

There do appear to be other standards for countersinks including an 82° angle. I believe that woodscrews also are different to metal screws but I’ve not had any to check against.

It would appear that the aircraft industry where thinner materials are common they use a 100° angle, in the UK where we use DIN or ISO the standard is 90° and the US where UTS is the standard have 82° angles.