The other month, Steam Punk Magazine was kind enough to offer me a slot in their periodical, to enthuse about brass and making the flea chariot.

The article should be appearing in edition #6 “The Pre-Industrial Revolution” which is out now. 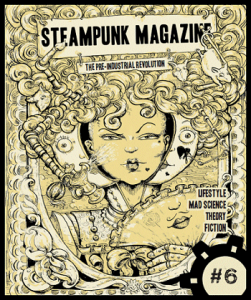 At a staple-popping 104 pages from cover-to-cover, it’s filled with a selection of stories, poems, reviews, interviews, articles, and how-tos.

The theme for the issue is ‘The Pre-Industrial Revolution’, offering an opportunity for us to begin explore the pre-Victorian aspects of the steampunk ethic, and the many faces of steampunk before and beyond the constraints of the Duskless Empire. It also investigates the ways in which steampunk is often an unindustrial (if not pre-industrial) revolution in its own right. All on top of a glut of regular content, such as features on:

Alchemy;
The Luddites;
Victorian Martial Arts;
Creating your own steampunk sculptures;
Building your own windmill;
An interview with British steampunk outfit ‘Ghostfire’.

The previous edition #5 had a good article on Metal Casting by David Dowling which is worth reading. 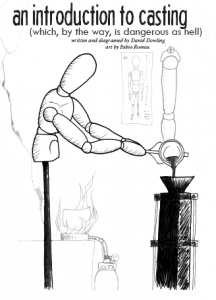