The latest progress on the flea was to add the eyes. I cast some large eyes from aluminium a few weeks back. The backs of these were a bit uneven so clamped them up in the workmate and ground them down using a flap wheel like the one below. 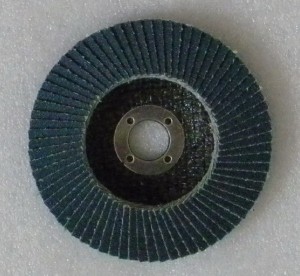 This produced no sparks, little dust (it must have gone somewhere though) and a very smooth surface finish. It was not until I tried to remove the eyes from the workmate that I also realised it had generated a large amount of heat. So much that I had to swap my leather gloves with some thicker welding gloves to be able to pick them up. The heat had also started to char the wood of the workmate. I also tried a standard cutoff disk with a piece of scrap and that also cut very well. So as a technique it’s good, I just need to reduce the duration of grinding to avoid overheating.

I managed to thread the rods on the frame and with a bit of effort managed to tap the aluminium sufficiently so I could attach the eyes. The problem I was finding was that the AL was ripping rather than tapping. I believe this is due to my pilot hole being too small with regards to the size of the tap. I also did not have a taper tap to start the hole wich would have made things easier. 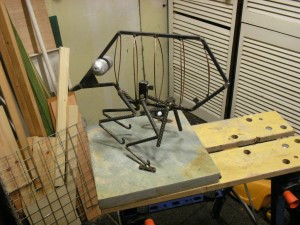 A nice piece of slate was bought from the local DIY shop to mount the flea and John Honniball @anachrocomputer has been giving me some tips on drilling it.

One thought on “Grinding and tapping aluminium”