Alex over at Shedworking advises me that the definitive guide to shedworking is now available to order. 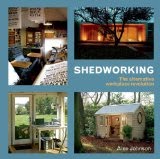 I’ll let Alex explain in his own words:

“The book is aimed at people who already work in garden offices, those who are thinking of doing so and those who are interested in new flexible working practices in general, as well as people who like architecture and especially microarchitecture. Hopefully it will inspire readers and reassure shedworkers that there is a large and growing movement of which they are a part and that they are not alone in their sheds. It’s not specifically aimed at women but I do hope lots of women read it: books about sheds in the past have been aimed fairly squarely at men and I think shedworking is very much a female as well as a male phenomenon

There are chapters on the best designs on the market, green shedworking, a series of case studies of shedworkers, working away from the garden office but in non-traditional offices e.g. coffee shops, how to build your own garden office, and a look at the future of shedworking and garden office designs. There’s also a comprehensive list of suppliers, details of building/planning regulations and a useful bibliography/further information section.

From the very start of setting up the Shedworking site I felt that many readers would want some kind of reference work which would bring all the ideas (and some of the photos) on the blog together in one piece in a more readable way. Although I do a lot of my work now in online media, I still value books for all their advantages and I know that many readers of Shedworking feel the same way. And while it’s ‘my’ book, I also wanted to celebrate all the hard work that the many creative people who build and work in garden offices have put in over the last decade – it’s their ingenuity that made it possible in the first place.”

Here’s a quick preview of the chapter on Famous Shedworkers including motorbike engineers, Harley and Davison, car builder Louis Renault and Ferodo engineer and founder Herbert Frood who all started in sheds.