This weekend was the PSTOIC Christmas dinner and the theme was “Something Magical”. Not having time to come up with something home made I headed over to Trafalgar Square and down into the subway to Davenport’s Magic.

I had a discussion with them on “self flipping coins” but concluded that it was going to be too tricky to learn in just one day. So I asked about simply to learn coin tricks that I though might work well at a restaurant table. The chaps demonstrated a good trick known as the coin squeeze where coins pass through a solid brass block. However for a one off event the price was a bit more that I’d have liked. 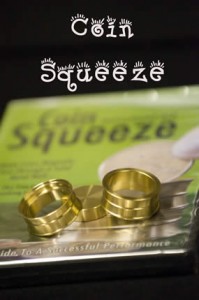 “Simple to do coin tricks are engineered, engineering costs money”, they said which got me thinking that I could perhaps make props for magicians in the Workshopshed but did not solve my problem of a lack of a trick for the dinner.

Davenports came up trumps and suggested a book, Self-working Coin Magic: 92 Foolproof Tricks by Karl Fulves which I bought and read on the way home. There were many good tricks in the book that I should have been able to setup in one evening. However, during my trip, I remembered a simple escaping Chinese coin trick that I’d learnt as a child.

I did not have any Chinese coins so I thought about using some Danish coins (which were unfortunately packed in a box in the loft). Luckily I’d just bought some cap head bolts from Namrick that I was taking along to a friend at the dinner so realised that washers would work just as well. A quick search through my box of nuts and bolts and I found a couple of suitable washers. The dinner was a success and thanks to good company and good wine the trick went down well too.

One thought on “Something Magical”