What had happened is that the pipe to the nozzle had perished with age (rubber and plastic pipes do eventually become brittle and snap). Each time I was squirting water on the screen, water was also dripping onto the top of the air filter from here it ran down the gaps onto the top of the engine. Because the weather had been bad the washer had been used a lot. As we typically only do short runs to the shops and back, the water never boiled off. So the water started to build up in the wells around the spark plugs. The first we knew of the problem was when the engine warning lamp started flashing, shortly after it came on solid and then engine started to misfire and the car lost power.

Give that I’m not keen on driving a car too far when the warning lights are on, I slowly drove home (about 1/2 mile) and called up the RAC. The chap attached the computer which reported that one of the spark plugs was problematic. He opened up the bonnet and quickly discovered the water around the plugs. He drained that (into the engine of all places) and swapped out the now rusty spark plugs.

A trip down the garage to replace the faulty washer pipe and the car should be fine again but it just goes to show how one little problem can cause you a whole load of grief.

I did a quick google search for this following the RAC diagnosis and it turns out there’s a few people had this problem, one of them has kindly annoted a picture of his car. 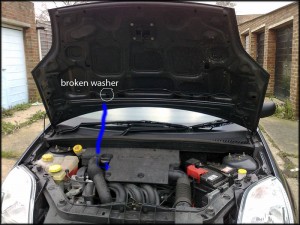 How a faulty washer pipe gives you engine misfires

2 thoughts on “For want of a nail”