Over the weekend I visited the Knebworth Country Show, it’s not as big as the Hertfordshire County show but it does have a nice village fete feel to it. The first thing I saw was a big tent with “Tools Tools Tools” written on it but I managed to escape from there without parting with loads of cash.

Part of the reason for the village fete feel was that the tents were all shapes and sizes rather than just being square. Next to the bouncy castle were the Knights of Honour, a medieval re-enactment group who were demonstrating armour and wepons, making meals and also running demonstrations in their medieval workshop. A bodger was turning wood and a blacksmith had a small forge where he appeared to be making swords. 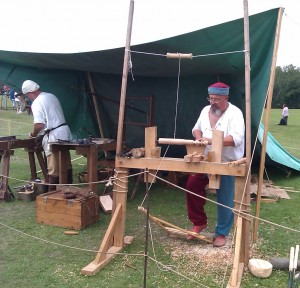 They were also teaching people archery which is probably not the best thing to do right next to a bouncy castle!

The show had a good range of crafts, mostly outdoor furniture with a large amount of hazel and willow creations.

One stand that stood out as being exceptional was Stan Jankowski a very tallented copper smith who had brough along a range of fanstatic wind powered sculptures, weather vanes and a large dragon. 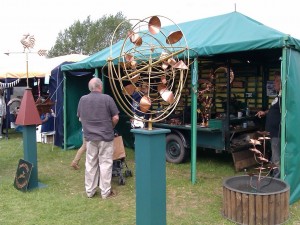 There was also an excellent selection of produce from places like Jimmys Farm and talks on Real Ale tasting and ferrets as well as displays of chainsaw carving and miniature pony racing.

Just as I was leaving I saw this little steam traction engine giving tours around the show. Unfortunately I did not find out who was running it as they were quite fast and steamed off before I had chance to talk to them. 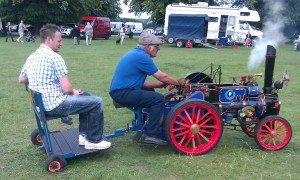