It all works with Magic Smoke

I was reading the story of a chap who left his grinder on the bench whilst welding. He commented that he’d “let the magic smoke out” and hence it was now not working. The issue was that the HF from the welder had passed through the grounded metal parts of the grinder and up the mains cable to earth melting the cabling in the process.

I once let the smoke out of my grinder when vents rapidly became blocked when trying to cut through some concrete, the grinder overheated within a few seconds and I was too late to spot it. 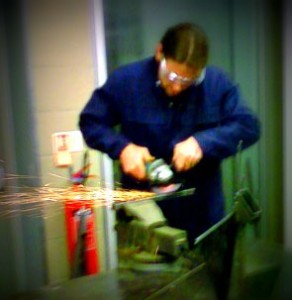 I do like that phrase “let the magic smoke out” so I checked the history of it. It seems to be relatively recent and is accredited to Jay Maynard who was working with some electronics.

“Once, while hacking on a dedicated Z80 system, I was testing code by blowing EPROMs and plugging them in the system, then seeing what happened. One time, I plugged one in backwards. I only discovered that *after* I realized that Intel didn’t put power-on lights under the quartz windows on the tops of their EPROMs — the die was glowing white-hot. Amazingly, the EPROM worked fine after I erased it, filled it full of zeros, then erased it again. For all I know, it’s still in service. Of course, this is because the magic smoke didn’t get let out.”

There is a rather dated theory that the magic smoke theory could be based on called the phlogiston theory which looks at the products of combustion. The idea is that because things are lighter when they burn then something must have been removed, this is the phlogism.

One thought on “It all works with Magic Smoke”