Just incase anyone did not twig, yesterday’s post about Leonardo’s Ipad was an April Fools joke, the fact the control mechanism was very like an Etch-a-sketch should have given it away. The touring exhibition Leonardo Da Vinci’s Workshop will be visiting Toyko this year after a successful year in the US. 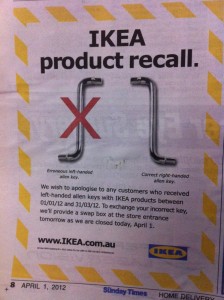 Thanks to iFixit for spotting that one.