I’m a big fan of sculptures made from found objects such as the kinetic scuptures of Gina Kamentsky or the cars and dogs of Josh Welton. My latest such find is CyberCraft Robots, it’s best to introduce them by their mission statement.

“All around you are objects that appear to be the ordinary detritus of daily life. Yet a small percentage of these objects are actually bits of unassembled Robot! Our mission at CyberCraft Robots is to covertly collect these seemingly mundane items, and reassemble them into the marvelous Robots they were intended to be.”

Workshopshed: Sarah, thank you for agreeing to be interviewed, can you start by telling us about the space where you assemble the robots?

Sarah Thee Campagna: Though I cannot disclose its origins, the Orbiting Laboratory currently enjoys a semi-synchronous orbit around the third planet of the Sol system, Milky Way galaxy. Our planetside base is located in St Petersburg, Florida, USA. Out of respect for the Earthlings we serve, the interior of the Laboratory very much resembles a converted, attached, 2-car garage.

The walls have industrial strength shelving on which are placed heavy bins of sorted Secret Robot Parts. I use two work benches, one at 33 inches high and one at 38 inches. This helps reduce fatigue because I can work in a variety of positions.

The taller one is kept empty except for the current piece, while the other is half covered my beloved drill press, a double grinding wheel and a couple of vices.

Workshopshed: Do the parts all get tidied away in boxes and racks or is your area more creative chaos?

Sarah Thee Campagna: Most everything STARTS OUT tied away. I forage for parts almost every Friday. While I’m in the middle of a piece, boxes of “new” parts tend to accumulate – because I’d rather make art than clean house. When I’m ready to start the next piece I sort the new finds – mostly by shape and size – clean up the benches, and begin something new.

A few times I’ve been so pressed to produce work, for a special show or something, that I’ve skipped the “clean-up between” step. It does not take long to find myself with only two square feet to stand in and surrounded by tripping hazards galore.

Workshopshed: How do you know which robots parts go together?

Sarah Thee Campagna: The Robots tell me! I usually start with one found object that I find interesting. This will usually be either the head or body of the piece. Then I let the piece start telling me what it needs next.

My style of work dictates that each piece must appear to have been INTENDED for the Robot. There is no haphazard sticking together of parts that don’t fit. Often something is “almost right”, and I’ll dig around looking “exactly right”. If “exactly” is just not available I’ll do some work to change the shape of the “almost” until it’s perfect.

Scale is also important in picking the next part. I go by what feels right to my eye, but I often use my own biometrics as a reference. I’ve measured my hip-to-knee and knee-to-foot lengths so often you would think I would have them memorized.

Workshopshed: I hear you don’t use welding or adhesives in your processes, how to the parts attach?

Sarah Thee Campagna: I’ve recently learned that the hipster term for what I do is “cold connections”. ‘Till now I’ve used the word “fasteners”. I use screws, threaded rod, nuts, rivets, and so forth. I often need to drill holes in parts where there were none before. I love blind rivet nuts. These allow me to put a threaded sleeve into a thin wall.

I’m not a big fan of tapping. Maybe I’m just not skilled enough at it yet to make the tight connections I like.

I will confess to using tread locking adhesives after parts are as tight as I can make them. This just lets me sleep better at night. I wish they weren’t so messy and colored though. If any of your readers know of a brand other than the usual one used in the US, I’ll send my Robots down to buy some.

Workshopshed: What tools do you use?

Sarah Thee Campagna: My number 1, most loved tool is my drill press. It’s a 10 inch, bench mounted, 5-speed. It is always set to slow for drilling metal. I have a drill press vice on the table.

My next most used tools are my dremels. (I just got the new 12v cordless for my birthday!!!) Most of the time I have a grinding stone on one tool, and a metal cutting wheel on the other. Now that I have 3 of these tools, it will be interesting to see which attachment comes to live on the ugly step sister.

I use an angle grinder with various wheels. I have a small compressor that runs my pneumatic riveter. The bench grinder, and a couple of vices round-out the tools that are out all the time.

Of course I employ the usual hand tools, plus a special tool for rivet nuts.

Sarah Thee Campagna: Other than my picaridin bug spray, my favorite tool is my Drill Press. My work would not be possible without each of these.

Sarah Thee Campagna: Ford ’51 is still my favourite Robot, but I have a new favourite piece. I recently built my first Raygun. I *really* love it, and it turns out there is a whole audience of Raygun fans who care nothing for Robots or Spaceships. 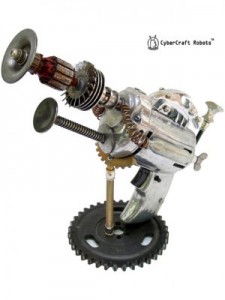 Workshopshed: What robots parts do you currently have on the bench?

Sarah Thee Campagna: At this moment I’m working on a piece for a show called “Cast Away”. Artists are invited to interpret that theme in any way they like. So I am making a fisherman Robot from a cast-off, antique fishing reel. On the bench now are the reel, and my first try at his legs. There’s also a weird little something-another out of which I may fashion the Robot’s fishing reel. And… a zillion fasteners and hand tools.

Workshopshed: Where can people see the robots?

In person, one can always see a piece or two in the retail space at the Museum of Fine Arts in Saint Petersburg, Florida. When I have an upcoming show, I write something about it on the front page of my website, in addition to shamelessly self-promoting on the above listed social media.

On May 25-27, 2012, I’ll be showing in Orlando, Florida. I’ll be at the Orlando Maker Faire on Saturday, and OASIS 25 (a Science Fiction convention) on Friday and Sunday.

Workshopshed: Many thanks for being interviewed and I hope the trip to Orlando goes well.