I was casually picking a splinter out of my finger the other day and remembered some advice that my mother had given me.

“Always use a needle to remove splinters, never a pin as that can cause infection”.

I decided to do a bit of research and work out why that was. The first thing I found was a news paper article. Back in 1899 Alfred Jensen was reported in the papers as getting a bad case of blood poisoning which was suspected to be caused by a pin. His hand swelled and was very painful.

Early pins were made of brass which was “tinned”. Neither brass nor tin are particuarly toxic so that’s unlikely to be an issue. However in the 1700s and 1800s this was changed over to iron wire with a coating (initially lead and antinomy but later nickel). Alfred’s symptoms are not consistent with either lead or antimony poisoning. There are reports of early iron pins being rusty due to the coating flaking off. Tetanus is the other illness associated with rusty nails but the symptoms are muscular spasms not swelling so its more likely it was septicemia possibly caused by a rusty or dirty pin.

Whilst researching, I noted that making pins was initially a manual job. One person could not make particularly many of these in a day, the Penny Cyclopedia reports that 10 people could make 5500 pins per day.

So mechanisation was important and there were many developments of this during the 1800s and 1900s. 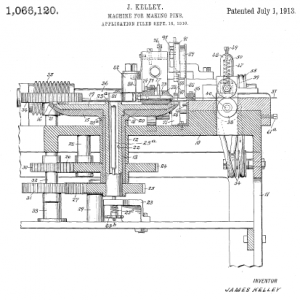 If you are interested in pin making then the technical educator from 1871 describes in detail the work of Timothy Harris from Waltham Abbey who was the first to put solid heads on pins.

Looking at how needles are made there is not a lot of difference from pins. The only thing I can see is that they are using high carbon steel that can be hardened, rather than iron. I can’t see any evidence to indicate that this makes a difference with regards to corrosion so I can see any reason to recommend needles over pins.

“The needles we supply are designed as a tool and are for the purpose to be used in the art of hand stitching. We do not recommend needles to be used for penetrating the skin.”

So perhaps a splinter removal device needs to be invented so I don’t end up like Alfred Jensen?

3 thoughts on “Pins and Needles”