I’ve been reading “South” – The Story of Shackleton’s 1914-1917 Expedition. The environment that the men and their equipment had to survive is one of the harshest in the world, temperatures significantly below zero, high winds, salt water and confined spaces in the boats. R. W. JAMES, M.A. (Cantab.), B.Sc. (Lond.), Capt. R.E. noted:

Another point which appears worth mentioning is the following: The foot-screws were of brass, the tribrach, into which they fitted, was made of aluminium for the sake of lightness. The two metals have a different coefficient of expansion, and while the feet fitted the tribrach at ordinary temperatures, they were quite loose at temperatures in the region of 20 Fahr. below zero. In any instrument designed for use at low temperatures, care should be taken that parts which have to fit together are made of the same material.

The conditions in my shower are significantly less challenging but still proven to be problematic. My shower room is tiled and obviously periodically wet and humid, this causes issue for having a shower tidy.

Firstly the issue of adhesion, we tried various sucker based systems. Initially just a simple set of suckers, that fell off; then a more sophisticated system that used suckers where you could increase suction by turning a wheel, that fell off too.

The second issue was corrosion, the mild steel covered with chrome rusted quite quickly. I looked at brass coated with chrome and solid stainless steel products but those were very expensive. Recently, I found the “GRUNDTAL” corner shelf from Ikea which is stainless steel and with removable plastic shelves, at £14 that met my budget requirements.

So that solved the issue of corrosion. A point to note on stainless steel is that you should not have it in wet environments in contact with disimilar metals as the galvanic action will cause accelerated corrosion, similar to Capt James’ problem with temperature co-efficients.

As a standard plastic wall plug would allow water to enter the hole a get behind the tiles I needed another approach to mount the tidy. I found some stainless steel self tapping screws and some epoxy putty. You need to drill a hole that is larger than your screw so that all of the screw is embedded in the putty. After drilling a hole with a tile drill, you mix the putty and ram it into the hole. I used cooks matches for this job. 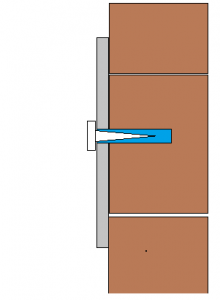 The screw is screwed in carefully leaving a little sticking out. This ensures that there is a water tight seal around the hole but still some material for the screw to cut into to ensure it tightens. 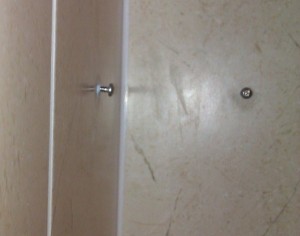 Once the putty has set, the screws can be removed, and if necessary the putty trimmed flush with the tile, the tidy is then fixed and the screws tightened.

Just a couple of points on this technique, firstly it’s not going to work with a hollow wall as there is nothing to ram against. It’s also not a good idea to do this if you’ve a wet room (or basement shower room) as they have a tanking membrane that seals all of the walls and this technique will not necessarily seal to the membrane.