Harold Hall on Preventing rust in the workshop

Given the time of year, I decided to ask an expert about how to minimise rusting in the workshop through the autumn and winter. I emailed model engineering author and ex-MEW editor, Harold Hall and he kindly replied with a detailed response which he’s agreed for me to publish on the blog. Harold’s also written articles for MEW on this topic which if you are a subscriber you can access from the MEW site.

“With regard to your question about preventing rust there are just two requirements to be certain 1. minimise humidity and 2. avoid rapid rises in temperature. The first is difficult, though a dehumidifier helps, and the second is expensive requiring heating, so compromises have to be made.

Perhaps you can glean something from my experiences.

Being aware that heating a workshop would help I installed oil filled radiators which were permanently on but set to just 40°F this made a noticeable improvement but was far from good but I lived with it for around 10 years. I did though start keeping my machines well covered in oil, as much as is easily possible. Accessories are though much more difficult also unpleasant to handle.

It was when I left full time work that one day I went into the workshop mid morning and found the machines covered in moisture, some quite large droplets, I was horrified. Because the machines were well oiled it was not a disaster but could still cause rust, if less severe.

Fortunately, the reason quite quickly surfaced. It had been a very cold night and with it being cloudy during the early part of the morning. As my workshop has large windows facing roughly south east it faces the late morning sun and as the clouds had suddenly broken the internal temperature had risen quite quickly. As the larger items could not react so rapidly to the change still remaining very cold it was mostly, but not totally, those that showed the most sign of condensation. 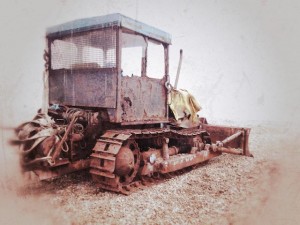 What can happen if you leave metal exposed

I raised the background temperature to 45° and installed blinds on the windows and the problem largely disappeared and have not seen such an event since.

This does not mean that I do not suffer some amount of rust. Large chunks of steel, stored on the sheds (wooden) floor is one area, but as these are invariably machined eventually it does not cause me concern.

One area that does suffer from rust is newly machined surfaces, even if after some time if not very lightly oiled. This has been particularly evident when we go away on holiday. In the last 10 or so years we have taken holidays of 4, 5 or six weeks starting usually in the early weeks of May and have turned off the workshop heating.

As my own made items mean more to me, than even quite expensive purchased items that could be replaced, I tend to hide these away in the odd corners of the workshop, sometimes nearer as a result to the workshops wooden floor. On returning I often find items that have a thin powdery film of rust, and always on machined areas that I have not oiled. I never experience this whilst the workshop heating is being used, so even in early May heating has its benefits. 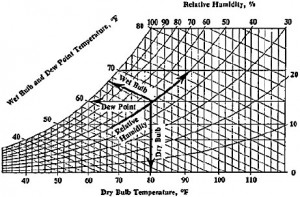 Returning to the subject of a rapid rise in temperature. I did for an early issue of MEW study the subject of dew point and its effect on condensation but with the intervening years this is now rather hazy. However, I do recall talking to an expert on the subject and he agreed that rising temperature would not alone result in condensation as there would still be the same amount of moisture in the air. The rising temperature would though be attempting to dry out the surrounding surfaces enabling it to take up more moisture, hence condensation would become possible. From this it can be seen that the moisture containing materials that make up the workshop should be kept to a minimum.

A dehumidifier would be too slow to prevent the increase in moisture in the air but would help as it would keep the workshop drier so the materials in it would be drier and the process start from a drier level.

The expert said that any moisture barrier in the buildings construction should be inside and not outside and suggested a vinyl floor covering for the floor and something similar on the walls. Also the benches, etc. should be non moisture absorbing.

I do have vinyl on part of the floor and my benches are made from melamine faced chip board and constructed kitchen cupboard style. The bench top is heavy duty chip board varnished on both sides and edges. The top with many coats to help it cope with ware and tare.

To recap then.
1. Try to avoid rapid increases in temperature, condensation only occurs when the air temperature is above the surface temperature.
2. Minimise moisture containing substances in the building and workshop fittings.
3. Do ensure that all steel surfaces have a very light coating of oil or other substance, see later comments.

A second workshop that has some interesting facts. I also have some woodworking machinery and tools that I use for my cabinet making activities and these are kept in the garage along with the car, often very wet. In this rust is almost non existent.

The garage sees no sun, apart from early morning, when the door can be quite warm being a dark colour on the outside. The construction is brick with one wall also being the bungalow wall and has a thick concrete floor. The construction means that it will absorb heat as the temperature attempts to rise during the morning having a cooling effect but will have a heating effect as the temperature attempts to fall during the night and early hours of the day. This minimising the temperature difference between the air and the machines that occur.

I do though use a lubricating wax on the cast iron tables of my large band saw, planer thicknesser, large disk sander and hand planes and after many years I only have a few very small rusts spots, say 3 or 4 of 6mm across.

I have also, when I think about it, used it in the metalworking workshop on my newly machined parts though I cannot be sure of its help as I cannot remember where I have used it and where not. I think I have seen spray furniture wax polish being used to minimise rust, but of course these types of materials will only be easy to apply on easy to get at surfaces.

The results in the garage can only put down to a more stable air temperature, even if relatively low. Being mostly on the low side the ability to take up moisture is limited as is evident by a very wet car often taking more than a day to fully dry.

As I have though largely eliminated the problem in the metalworking workshop there would appear to be no reason to change the methods I am using. However, this is achieve as some cost. In 2009 I recorded the power I was using to keep my workshop heated, and from this estimated that my winter season heating cost were in the region of £110. This may seem a lot but my workshop is largish at 18feet by 8 feet.

The figures showed though that I used 400 daytime units and 250 night time units. The results were published in issue 157 of the Model Engineers’ Workshop magazine.

With night time units costing only 40% of the daytime figure I have decided to carry out an experiment this coming winter. This is an attempt to increase the night time use compared to the daytime.

To do this I intend to turn off the heating at about 3pm when the temperature will be reducing. This making the metal temperatures higher than the air temperature. I will then turn one of my two oil filed radiators on at around 1am when the cheap rate starts, the radiator being set at 45 degrees. The second radiator I will switch on at 4am with it set at 60 degrees then turning it off when the high rate starts, 7am. This though will leave the metalwork relatively warm and therefore less likely to suffer from condensation should the daytime temperature rise rapidly. The first radiator will remain on set at 45 degrees until it is switched off at 3pm, as stated above.

I should add that the radiators are relatively low power so should not cause rapid temperature rises when switched on. I will monitor the result using two of the economy plug in power consumption meters.

A big thanks to Harold for his explaination and I look forward to hearing the results of his experiment.

One thought on “Harold Hall on Preventing rust in the workshop”