Although I have power to my workshop, it is currently limited to two sockets down one end. This means that if I want to use anything down the other end, such as the drill or grinder then I have to use an extention cable. The other evening when I’d been drilling something I managed to smash the guard off my bench grinder with the heavy end of a retractable four way extension. 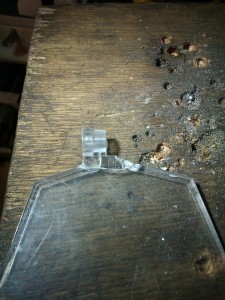 I did contemplate fixing it with the same glue I’d used for my battery charger fix but then I spotted a small piece of aluminium block on the shelf. 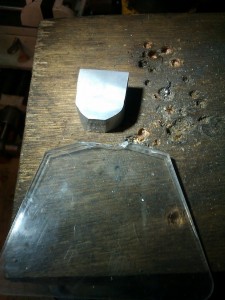 The block was one of the test pieces I’d made sand casting a few years back, it had already been cleaned up and I’m guessing that it was part of a larger block that was used for something else.

Using an angle grinder with a flapdisk I rounded off the corners, trimmed the sides so it would fit, and added a step into the front face. I drilled a hole for the pivot and for a couple of smaller holes for screws.

I then cut the plastic guard so that it would fit on the front and drilled clearance holes for the screws. I had to cut my self tappers short so they could tighten on the plastic. My tip for the day is to screw those into the block first, then remove them and re-assemble with the plastic. That stops you running the risk of damaging the plastic with a slip of the screwdriver as you need to apply a bit of force to cut the initial threads. You also need to be careful not to over tighten and crack the plastic. Perhaps the addition of a rubber or fibre washer might help with that? 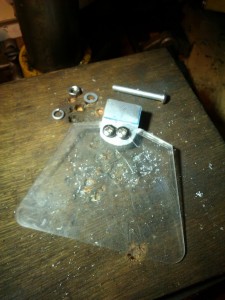 Once it was assembled, all that remained was to bolt it back onto the grinder and if it gets damaged in future it should be straight forward to cut a flat piece of polycarbonate to replace it.