Back at the end of 2010 I bought a new 100mm jaw mechanics vice from Axminster as an upgrade to the existing draper one I’ve been using. The existing vice is quite small and there is an issue with the locking mechanism which means that it will rotate under pressure which makes it a pain to use. However it does have a simple screw so I can remove it from the bench easily when I need the space. 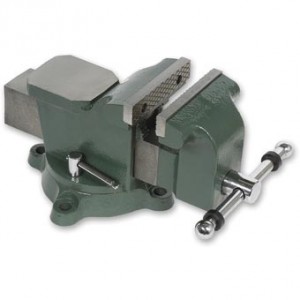 The new vice has been sitting in it’s box ever since waiting for me to mount it on the bench. I wanted to have a mechanism so that I can remove and replace it from the bench mounting without issues.

As a New Year’s resolution I was determined to get the vice mounted this year. So on New Years day, I made a good start to the project, I sawed up some steel bars and drilled them so that they can be screwed to the underside of my bench and the vice will be then bolted through the bench into tapped holes.

Today, I positioned the vice at the end of the bench, pretty much where I’d been using the old vice. It’s important to not put it too far back or you won’t be able to spin the handle. I also had to ensure that the holes were not going to clash with the bench supports or legs.

When I was drilling the holes in the bench I spotted some metal tubes with a flange around on end. I’m not quite sure what these are but I believe they are some kind of plumbing accessory as they were in a bag of miscellaneous plumbing bits left by the builders when they did our extension. I had two different sized and one was a perfect fit on an M10 bolt and I conveniently had 4 of them. The tubes were cut to length and slid into the holes, the tops were hammered down so they were flush to the bench. I had concidered counter boring but that wasn’t necessary as the pipe cut into the wood very easily. As an alternative I have a variety of steel and copper pipes that could have been used. 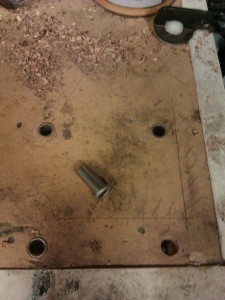 I test fitted the vice and held it in place with some nuts and washers under the bench.

That allowed me to tap the holes for the bolts, I love this kind of bootstrapping technique, David Gingery’s lathe headstock and Reprap 3D Printer Repstrap are other good examples of that.

Once the holes were tapped, the bar was held in place and the bolts tighted. I then screwed it into the bench with some woodscrews. 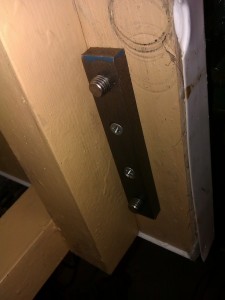 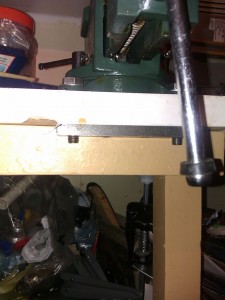 Finally, I tapped the two holes the second bar, tightened up the bolts then screwed it into place.

3 thoughts on “Mounting a vice”