For a some time 3D printers have been provided in kit form, often requiring soldering and programming skills to make them work. The relative newcomer to the market Afinia has a different approach to 3D printing being an “Out of the Box 3D Printing Experience”. They have recently been listed by Silicon Angle as one of the top 5 3D printers and were also featured in the Make Ultimate Guide to 3D Printing.

Aaron Pratt, Afinia’s Vice President of Marketing has spared some time from his busy schedule to answer my questions on the Afinia printer and on 3D printing.

Workshopshed: What sets the Afinia H-Series printers ahead of the rest?

Aaron Pratt: I’d like to start by thanking you, and all the others, who have found, and continue to find, our story to be of interest to their readers. As a small enterprise, this has been a key component of our success. We also happen to have a pretty good product and product support. 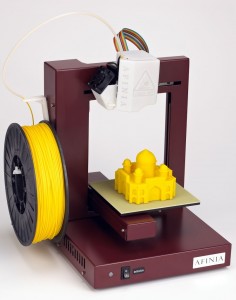 Aaron Pratt: You hit the nail on the head when you mentioned “Out of the Box 3D Printing Experience”. The H-Series is designed so that anyone can be printing within 30 – 45 minutes of removing it from the box. We’ve had everyone from Middle School kids to people in their early seventies report back to us that this is, indeed, the case. That’s why Make Magazine named the H-Series “Easiest To Set Up” in their 2012 Ultimate Guide to 3D Printing.

Workshopshed: So you don’t need to be a Maker to run this printer?

Aaron Pratt: Although there are quite a few Makers who have our printer, we have paired the H-Series with integrated software that was derived from Commercial Grade 3D printing. All one needs to do is open an stl file, auto-place it in the build area and click “print”. Our software automatically slices the file and sends it to the printer. The software also has a nice automatic “Fix” feature to repair stl files that are not quite ready to print. There are plenty of controls for those who like to “tweak” how their designs will print. One can vary the Z axis resolution, print speed, thickness of the base material, support structures and internal fill. The H-Series received an award of “Easiest To Use” from Make Magazine for this functionality. We also have support via telephone, social media, email and forum. 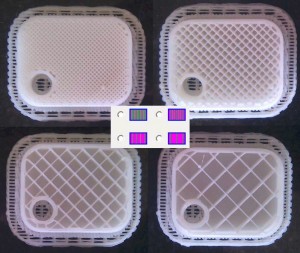 Workshopshed: How does the experience of setting up using the product compare to using a regular printer?

Aaron Pratt: The setup is designed with as few steps as possible. Unbox, remove the packing material, plug it in to power and your MAC or PC, install the software, level the platform, set the print height and that’s it. We’ve developed a neat, three-way platform leveling system that makes setup easier than other printers. This is very similar to setting up a 2D printer.

Workshopshed: What do people do if they need spares for the machine?

Aaron Pratt: In true Maker fashion, any of the plastic pieces of the H-Series are available on our web site www.Afinia.com for download and print. Also, most of the components are available for purchase from various electronics wholesalers. Currently, we sell replacement extruder heads and build-area perf boards. 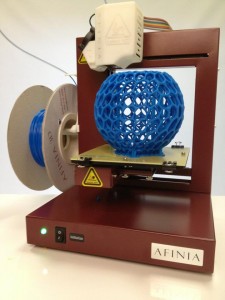 Workshopshed: What other kind of things are people using the Afinia printers for?

Aaron Pratt: We have hobbyists printing scale models of circus animals, radiographers printing pre and post-operation models of vertebrae, educators and their students printing CAD projects and engineers printing product prototypes, instead of queuing-up for their enterprise printer. Then there are the folks who have one around the house “just for fun.”

Aaron Pratt: We’ve turned that model on it’s head and taken the approach that pretty much any top-quality, available-on-line filament will yield great results. In some cases, our printer’s cost of ownership can be as much as 80% less than those that use proprietary filament cartridges, resin or other media. No, we don’t see the 3D printer market moving in our direction. Quite frankly, filament is not as technical as is inkjet ink. However, it is possible that, with eventual resolution refinements and new materials, the market might go back to expensive consumables – just not right now.

Workshopshed: You’ve recently started selling glow in the dark filament, what other advances do you think there might be for filament?

Aaron Pratt: We also have two versions of Temperature Reactant filament. There currently exists filament made from wood, which we are testing in our printer; and PLA, which we already use. The next logical step would be filament made from a ceramic material and metal. There are additional engineering considerations that need to be overcome – it’s not impossible. In-office filament recycling may be possible. The concern there is that the filaments’ properties change as it is extruded and hardened, melted and reused. It might not perform as well as the first-used version.

Workshopshed: How long before full colour printing will be mainstream?

Aaron Pratt: That will take a few years. The evolution of desktop 3D printing has been very similar to 2D printing. At first, one color, then multiple colors. Inks mix much more readily than filament. It could be possible to have Cyan, Magenta, Yellow and Black filament feeding into a single extruder head and mixed. Currently, the head, mixing and filament technology is not ready for the consumer market. The X & Y axis positioning are ready as is the Z axis resolution, which is some instances is as fine as ten microns.

Workshopshed: What do you thing the future holds for 3D printing?

On a larger scale, we see major advances in 3D rendering software and scanners to make it extremely easy for an average person to quickly design a replacement part. We, as a result, see huge databases of user-generated models so that, literally, any plastic, wood, ceramic or metal part that someone would need to repair or replace could be printed at home.

Workshopshed: Do you foresee that causing any problems?

Aaron Pratt: This is a good place to talk about the intersection of 3D printing and Intellectual Property Rights, or, Utility and Design Patents. We see the same battle here as was fought with digital music. We also believe that the solution is similar: Make it so inexpensive to buy a part for download that most consumers won’t go through the exercise of scanning and tweaking the design.

There are some interesting ramifications for manufacturing, where, instead of going to a car dealership, one would visit an existing 3D manufacturing plant to select the precise color, version, options that they want. The vehicle would be printed in a matter of days. Disintermediation of supply chains would be rampant and component manufacturers could become rare, unless they were nimble and highly specialized. The automobile designs would be licensed to the manufacturers who would pay royalties to the design companies.

Workshopshed: Many thanks for your detailed answers on the printer and facinating views on 3D printing.

Aaron Pratt: You are very welcome! Thank you for the opportunity to answer your questions.

One thought on “Afinia 3D Printer”