When the builders finished our extention they left me some timber, mostly 2x4s. I also had some scaff planks that I interited with the house. At the beginning of this year, I decided that the big pile of wood was taking up too much space in the Workshopshed. The reason for keeping it was that I’ve been planning to use this to build a potting bench for my mother in law for some time. So I threw together this quick sketch to show her based on a plan from Jane Wrigglesworth from NZ Gardener and NZ House & Garden. 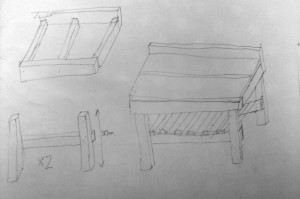 Before we go into the details, I’d like to point out that woodwork is not really my speciality. Yes, I was taught at school by the master craftsman Peter Lloyd but that was a long time ago and apart from the Workshopshed benches and drawers I’ve really not had a lot of practice since then.

We decided on the size, 85cm legs, 1m long and 2 scaff planks deep and I made some tweaks to the drawings based on the wood available such as having bigger back legs to front legs.

To give the legs a bit more strength, I decided to join them with a half lap joint as well as screws. Here’s how you can do that. Firstly mark the position and carefully saw down to the line at each end. Then add more saw cuts in the middle with each section a little wider than the width of your chisel. Use a chisel remove the wood in the middle. Don’t try to remove too much at a time, I did it in two passes. For first joint I then needed to then spend a long time taking tiny slithers off each size with a surform and the chisel until the second piece of wood fitted when hammered into place. The end of the cross strut was simply cut with the saw and tidied up with the chisel. 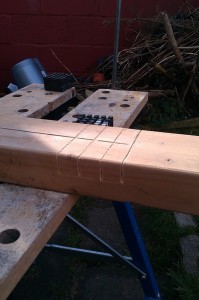 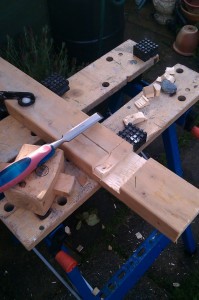 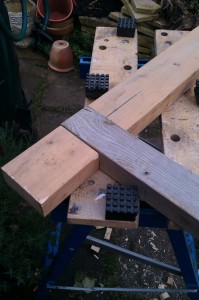 The second leg was much quicker to make but not quite as snug a fit so will fall out if twisted but it does not wobble which is the important thing so I’m glad I went for the half lap approach.

Next: Finishing the legs

One thought on “Potting bench – Part 1”