Another little project I completed back in August last year. Before I found my little anvil on eBay, I decided to make some bending forks to be mounted in the vice. These are basically some pins sticking out of a plate that can then be used to wrap metal around. I designed it around the materials I had available so that included an offcut of steel plate and some round bar. I thought it would be useful to have some if I wanted to make anything else like the coping saw I’d made with Jo. 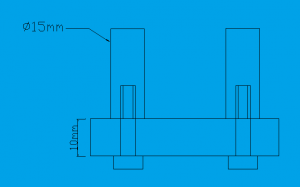 I bought some new bolts as I did not have anything large enough. As per a lot of my projects I ended up buying a new set of taps as the one in my origional set were not upto the job. I have found that when tapping holes, having a full set of taper, second and plug make the job so much easier. The taper tap just cuts a thin groove for the next taps to follow making those a lot easier to use. I got these ones from UKDrills who are currently favourite supplier for drill bits. 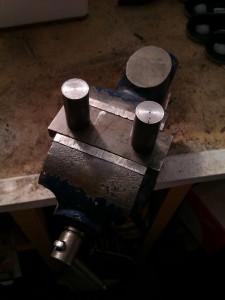 I cut the pins to length with a hacksaw then tided them up by facing off in the lathe, they were also drilled in the lathe. The plate was cut and hand filed before drilling.

One small change I might do is to drill an additional hole so that the pins can be placed closer together.