For a project that I started the other year I needed an M14x1mm tap which I purchased from Arc Euro Trade. It was not until I decided to use it that I realised I did not have a tap wrench large enough.

I knew I’d seen some ideas for tap wrenches in one of my books and I found some in “Making Small Workshop Tools” by Stan Bray.

I went for the simplest design which was basically a couple of square bars drilled and tapped and held together with screws. I had some black rolled mild steel which did the job perfectly, you can see it here next to a more convention design for a smaller tap. 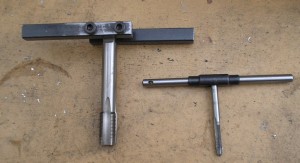 Hopefully I’ll get around to finishing that other project and you’ll be able to see why I needed such a relatively large tap.