On international women’s day, I put a shout out for all the women blacksmiths and welders I know on twitter. The result was a request from welder Stephanie from ASingleSpoon for a spoon for her project. My first thought was to send a bar spoon similar to the one I used for skimming metal in my casting projects.

However after spotting the steps for blacksmithing a spoon on iForge, I thought I’d make one instead.

I used a propane torch to heat a piece of mild steel bar (previously salvaged from a rotary drier) along with my hammer and mini anvil to form the spoon. 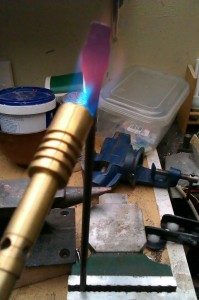 I did not have much success in thickening the bar using upsetting so I proceeded to flatten and thin the end of the bar with the hammer. I found that the ball pein hammer was particularly good at that. I managed to go a bit off shape so I actually hacksawed the end of and tidied it up with a file.

When I came to the step of rounding out the bowl I used a hammer head in the vice as I don’t have an appropriate hardy tool or former. 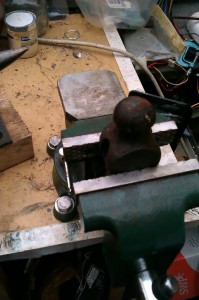 Here’s the results on the anvil and in a bowl for scale. 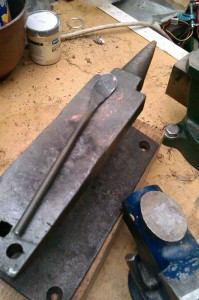 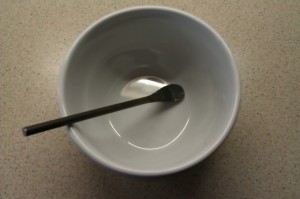 Although I’m reasonably pleased with the results, it would have been good to have a wider bowl on the spoon and to know why my shape went off. So I re-read New Edge of the Anvil, that points out that I should have heated my metal to a yellow colour before trying the upsetting.

Jack Andrews also has detailed steps on making a spoon in his book. I also watched Modern Blacksmith’s video on upsetting, see below which has a good explaination of the difference between upsetting and heading which is where I got my distortion from. It also demonstrates using cooling to control what parts of the metals are affected, a technique that Jo the Iron also showed me.

I’m tempted to have another go at these processed but rather than making a spoon I’ll make something like a hook or shackle/clevis.

To get the metal hotter, I’ve been looking a micro furnaces such as the one on published in Make Magazine.

2 thoughts on “Making a spoon”