I needed to move an old fridge and tumble drier which we a bit big for me to handle by myself. I had previously bought some rollers but they had bent last time I’d tried to move anything. Given that I just happened to have some short pieces of planking from the potting bench project, I thought I’d add one of those to my wheels. 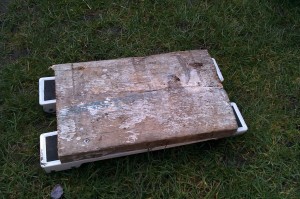 The end result although probably not as good as the versions that house and office movers use, worked perfectly and I moved the old appliances through the house with ease. I was told that a few hours later the scrap men knocked on the door and asked to take them away so we don’t even need to worry about that.