“A sandbag? Are you expecting flood?” I was asked.

“No it’s for metal forming” I replied.

When I’d been making the candle snuffer, I’d found it difficult to get the cone shape on the end and using the anvil covered the piece in scratches which then took effort to remove. Looking on google I found a few references to using a sand-bag or shot-bag to form curved metal which I thought should help with that kind of work and other projects.

I also found a couple of articles on making one yourself which inspired me to track down some materials and make my own bag.

Being in London I’m lucky to have a variety of shops within walking distance of my office. A web search showed that Borovick Fabrics on Berwick Street had leather for sale. I had a look at their big pieces and then spotted a “scraps” tub by the till which had a couple of pieces that were plenty for my needs and also at a very good price. They also had some thread but I needed to pop around to Kleins around the corner to get some leather needles.

Just a quick thought on leather needles…. If they are sharp enough to go through leather, then they will also easily go through your fingers!

I marked up the leather with some chalk in the shape of a large lozenge. I figured that having choice of a straight edge or rounded edge would be useful but it also got me a larger bag from the piece of leather. I also used some scraps to make a finger protector as after stitching for an hour my fingers got a bit sore. 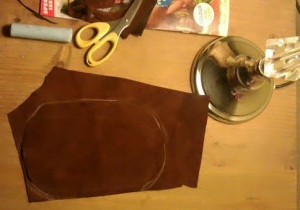 After cutting it out, I glued the edges together with PVA and then stiched around to the end leaving a small hole for the sand. As you can see from the picture below this was perhaps a little small as I had terrible difficulty in turning it the right way around. 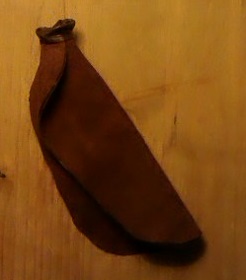 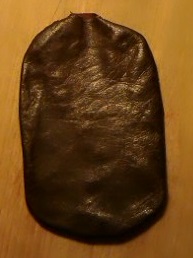 Filling with sand was delayed as I needed to dry the sand out to run through the funnel. Luckily it was a warm weekend and I left some in a tray for the afternoon. It takes more sand than you’d expect so best to dry more than you think you’d need. I glued and stitched up the hole, it seemed to be leaking sand slightly so I double stitched it. Hopefully it won’t explode in use. 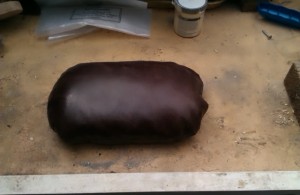 I don’t have any imediate projects than require the bag but I’ll let you know when and what it get’s used for. 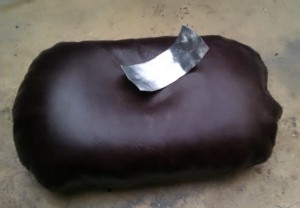 The total cost came in at about £7, I already had the sand but you can buy a 15Kg bag from Argos for £2.99 (prices correct at time of press). Note that many of the commercial bags you will find on the net don’t come with content so you will still need the sand or shot.

If you are not up for making your own bag then it is possible to buy them. One supplier I found who does these is Stakesys, I’ve never bought anything from them but they come recommended by some of the people on the Mig Welding forum.

Since making this, I’ve had some issues with the sand escaping from the bag. I’ve reglued some of the edges but suspect this might be a continual problem. My options are to swap the sand for something larger, use a liner (perhaps a plastic bag) or just live with the issue.