When I replaced my shed roof, I used a thin piece of plank of internal wooden cladding painted with some preservative, after two winters this was faring badly against the weather (photo taken before the guttering was added) 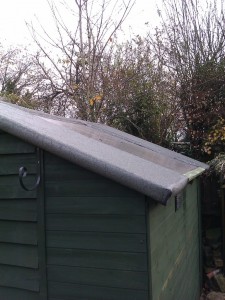 I’d spent ages trying to get the sealant up against this plank to form a smooth ramp so that water would not puddle but it still did and I think this accelerated the deteriation of the wood. In heavy rain there was also a constant flow of water over this piece and the green stain was already washing off. There was also some damage to the edge of the plank, I’m not sure if that was also the rain or animals walking on the roof (cats and foxes).

So on a dry day in April I took the plank off and replaced it with some aluminium tiles. I made these from thin squares of aluminium I had in the spares box. I nailed these on with large headed zinc nails then used gutter sealant around the top edge. This should last a bit longer than the previous version and should also give a bit of protection to the wood underneath. 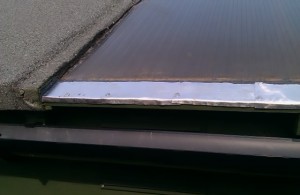 One thought on “Shed roof repairs”