Following a discussion with Patrick Andrews on Twitter about the opening of a new Heath Robinson museum we got onto the topic of heros, I thought I’d share with you a few of my childhood inventor heros, two fictional and one real life.

As a child I was a regular reader of the Professor Branestawm books by Norman Hunter. 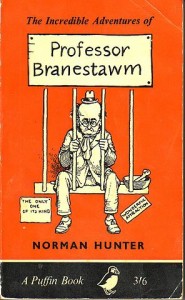 The plots were typically quite simple, the Professor’s friends or housekeeper would often indicate a requirement for something to be done, often simple tasks such as cleaning the house or finding the Professor’s glasses. The Professor would then create totally over the top gadgets to achieve the simple goal. Often these would go wrong due to something that the Professor forgot to do and general chaos would ensue.

Despite the fact the inventions rarely worked, I loved the creativeness of them and these inspired me to make things out of pegs, cotton reels and string which equally often did not work.

The books were expertly illustated by Heath Robinson.

Olaf the Lofty was the court inventor for Noggin the Nog the King of the Northmen. Like the Professor he did not have a good track record of success. However, I know him from the Nogmania book from the 1970s in which many of his inventions such as the automated feeding hall did work pretty well (apart from small dogs eating the chickens).

My last hero to mention is a real person. Mat Irvine is a model maker and special effect expert. When I was young he appeared on the saturday morning show Multi Coloured Swap Shop demoing space ships and more. He’s since been involved in a couple of great TV shows, The Great Egg Race and Robot Wars.