I’m working on a clock project that requires the disassembly of an old clock. The cover was removed by undoing 4 screws on the rear, I’m not sure of the name but they are similar to those used for bike spokes with thin threaded rods attaching the ring to the face. Once I’d gently levered off the hands with a jewellers screwdriver I realised I was going to need a specialist tool to remove the clock from the body.

There was a nut holding the clock to the body with a slot for a screwdriver. The problem was that there were the spindles for the clock hands in the middle, in the way. 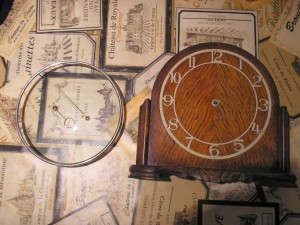 Basically I needed a larger version of my security screwdriver.

Given that I did not want to break the clock I avoided the T-bar design this time and just made it from a simple strip of steel. Also I decided against hardening the metal as I thought it might scratch the nut that was being removed. 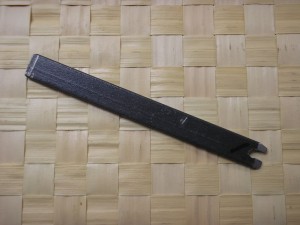 I cut the bar to length and drilled a hole the size of the spindle near to one end. Then using a hacksaw I joined the hole up to the end. Finally using a file I thinned the end and rounded the corners off until it was a good fit in the slots. 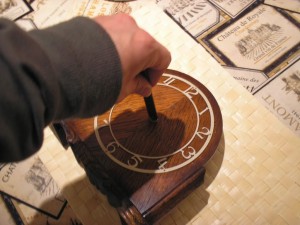 I’m sure I could have removed the screw with a drift and hammer but this tool was quick to make and avoided damage to the brass nut. It will obviously also be useful when I come to re-assemble the clock.