This year has been a great year for projects, I started the year by fulfilling a New Year’s resolution and mounting a vice. I also did a bit of upcycling turning some old scaffold planks and builders discards into a potting bench which was finished in time for Mother’s day. 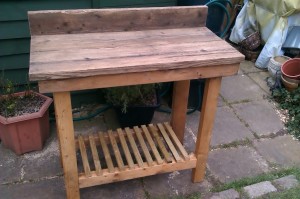 In the spring I discovered the homemade tools website, this is a great site which catalogues some great tools from around the internet which are all home made. I’ve added mine to the collection and was actually surprised as to how many I’d actually made. I added a few this year with my sandbag being very popular.

Also popular was my blacksmithing tool, the bending forks and I had fun making a spoon from a steel bar.

Two related projects was the repair of a toy train and building of a lead acid battery charger and in the home I made a candle snuffer in brass with a sugru handle and a trivet from some spare bathroom tiles.

A lot of time went into restoring an old BBQ along with welding up a new shelf but it was ready before the weather got really cold. 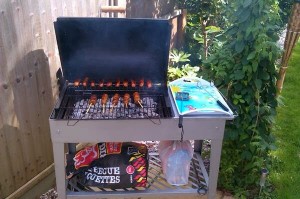 As well as these low tech projects, I ventured into some 3D printing. Hobby printer Richard Gain printed me some patterns for a flywheel and then I met him at the opening of iMakr 3D printing store. Hopefully I’ll have a chance to do some casting in 2014.

Another first for London in 2013 was the Mini Maker faire which I attended in the summer and earlier this month a bunch of makers amazed the world of model engineering with their creations at the Model Engineer Exhibition. 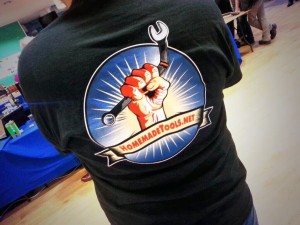 Me at the Maker’s show, photo credit Concrete Dog

I’ve finished off the year by starting a new project which is a bit silly. The silly clock is based on a Mr Men book, a clock’s numbers are rearranged and the hands are driven by stepper motors and an arduino so that it still tells the correct time. Progress is going well so hopefully this will be finished early 2014.

Nearly all the visitors to the Workshopshed in 2013 are using a desktop computer, surprisingly mobile users are down but there have been more visitors using a tablet device this year.