The Arduino Micro is one of the newer Arduino models but it does not get much of a mention. Like the Leonardo it has a single microcontroller chip, the ATmega32u4 which is an 8bit controller with 32K of Flash and 2.5K of RAM as well as onboard USB, PWM and A to D capabilities. The single chip approach means it can be used as a mouse, joystick or keyboard, or other USB device. Because of the USB port, you don’t need an external programmer or adapter to program the board.

Given the simple design and small size the official boards are surprisingly expensive. However, I managed to pickup a clone made by Deek-Robot for a bargain price to act as the brain for my clock project. This is just 35mm x 18mm and 13m tall including connector and pins. 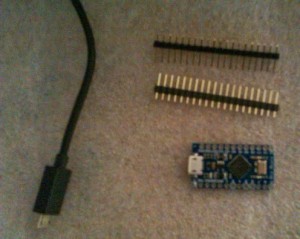 As you do with all the other Arduinos, the first thing I did was to load the blink sketch.

However, I was slightly concerned that nothing appeared to happen. So I swapped for an example that showed all of the ASCII characters over the serial port and that worked fine.

So I read up a bit more on Sparkfun tutorials and it turns out that there is no pin 13 LED on the micro which explains why the standard blinkie sketch does not work.

The other things to watch out for on these boards is the lack of reset switch, so you’ll need to wire your own. Also it has a boot loader mode which is entered by a long reset and exited with two short resets. If your device is in the bootloader mode you won’t be able to upload sketches.

The only other potential issue with these boards is there are no mounting points, however I plan to mount mine on a parent board using some standard female headers. I’ll see how this project pans out but it looks like this could be a very handy board to put into projects so I could be buying more.