Back in Nov 2012 I backed a project on Kickstarter for a small Arduino like microcontroller system called “Smartduino” which I hoped to use for an internet connected humidity monitor. About this time last year I was expecting to see it delivered. 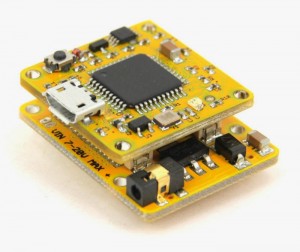 I’m still waiting, which even by Kickstarter standards is a long time. Some people did actually get their kits in the middle of last year such as TechGurka.

I backed the project because it had some had some good signs, the boards already existed, there were US, Europe and Asia warehouses for the distribution and the project owner had previous experience dealing with Chinese manufacturers. There were also some sensible technical decisions such as basing this on existing technology, sensible mounting holes and the polarised connectors being used by the bus.

However, even before it was fully funded there were squabbles between Dimitri the project owner and Massimo (arduino founder) over some of Dimitri’s claims about being an Arduino manufacture. Then in Jan 2013 we were told about a delay due to Chinese New Year. Given that Dimitri had been working with the Chinese for over 7 years at this point you’d really expect him to know about this kind of thing.

Throughout 2013 we got various updates such as a video with a small office crammed with finished components ready to ship, a test rig and a couple of demonstrations on how to use the boards. We also saw Dimitri trying to expand the system with connections and adapters to make it talk to other components such as the Electric Imp, DigiSpark and Tiniduino. We also heard of difficulties with the reliability of the level shifting circuits which convert signals from 5v to 3.3v and allow some of the accessories to work. We have also been shown some pictures of work in progress Fritzing libraries and a partially complete smARtMAKER Open System wiki.

On the shipping side there was an update that suggested that all of the simpler kits had shipped but it would appear that none of those people wanted to take photos or write about their experiences.
The backers were also presented with an option to have some of the bits sent separately but the decisions was made to send everything at once. All through the year Dimitri has told us that it won’t be possible to give firm dates for shipping.
In the middle of December last year a few people have had deliveries including two in the UK. However even for those that have shipped there are reports of missing components. A video unboxing and tutorial by Joseph Stackhouse is shown below.

As the months passed the backers got more angry that their parts had not arrived and a few more vocal ones suggested that perhaps it was all a con. This was not helped by the fact that Smartmaker chief engineer started up some smaller projects on indigogo which makes the whole setup look like a Ponzi scheme. A few people are using trolling tactics across various forums as well as the Kickstarter comments. There is a bit of a smell of conspiracy theory about their claims with most recent a suggestion of spamming that does not seem to add up. They also seem to have a lack of understanding about how business work such as the fact that the “registered company address” is rarely where all the work is done and is often a 3rd party’s address who did the company registration paperwork.

Given the evidence, I don’t think this was just a sophisticated con. There is evidence that a lot of parts have been made and evidence of shipping to a variety of different countries. However, Dimitri has shown himself to be disorganised and easily distracted. There is even evidence that SmartMaker has put a some effort into this project. 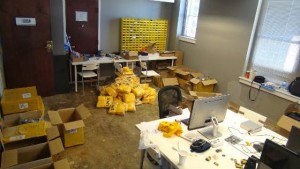 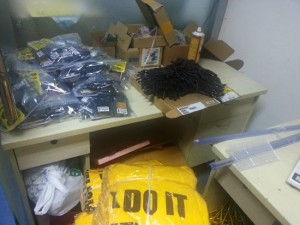 So do I think I’ll get my boards and have something that will work for my internet of things humidity monitor?

Whilst I was writing this I was not very optimistic, as out of 900 backers only a few have their parts and the doomongers do seem very adamant in their opinions. Their are also many people who need to have their rewards fullfilled and the Ethernet board was one of the last to be finished as Dimitri says that’s now on revision 4. Also my order is currently marked as being assigned to the USA rather that Europe so that looks bad. However, going back over some of the updates, looking at the documentation of the pinouts, pictures of boxes of parts etc, I am slightly more up beat so perhaps I will be doing it yellow after all.