I first heard of @ResinVC when someone shared a picture of some special mold opening pliers. The process uses a vacuum chamber in which resin mixed and then poured into a flexible mould. Because of the lack of air you end up with a high qality solid component. I got in contact with Brian Dainty of Resin Vacuum Casting to find out more.

Workshopshed: Brian, thanks for agreeing to be interviewed, resin vacuum casting has been around some time but I’d not heard of it till now.

Brian Dainty: Most people have never heard of VC. This is because it has always cost a great deal to get the equipment to do it (£20k doesn’t get you much) so it has remained a tool for those in the design/development industries. 3D printing has been around for 20-25 years but the world never knew about it until very recently. VC is the missing process from the family of resources which have been available to industry for all this time. CAD, CNC, 3D printing and VC. Those are the tools we have used to make and develop products. Now everyone has a CNC or 3D printer, but if you have ever seen the commonest type (FDM) you will see that it is simply not good enough to use as a saleable product. Parts have to be painted and finished properly, but this is not viable for a small production run, so you cast them.

Workshopshed: What kind of items can be made with resin vacuum casting?

Brian Dainty: In terms of materials, most items, which would normally be injection moulded plastic and rubber can be replicated by VC. As to the actual product types, almost anything goes. Over the years I have made a lot of prototypes for pre-production testing, but also lots of final product and items which would otherwise be too costly to make because of the high investment required for injection tooling. These are termed “low volume, high value” products, and there are a surprisingly large number of them out there.

Workshopshed: What industries use this technique?

Brian Dainty: Design and development houses and of course prototyping bureaus, have used VC for 25 years now. It’s not a new technology by any means, it’s just been kept quiet. Some of the biggest users are the automotive companies, who have always made their prototype car components using VC, even to the extent of casting entire dashboards and consoles.

It’s a great way to make real products on a small scale without a massive tooling cost.

Workshopshed: How long does it take to make a new mould? And how long to cast a new component?

Brian Dainty: A mould can take as little as a couple of hour to set up, run the Silicone and cure ready for use. More complex parts do take a bit longer though, and can involve metal cores, inserts and intricate split lines. Each case is individual and there are lots of factors to consider; number of parts, material, finish, etc. which can all have a bearing on how long it takes to produce a mould.

Casting does, however, always take the same time pretty much regardless of the part being made. The process is always the same. For my machines, it’s around 15 minutes to cycle a tool through the machine (including preparing and demoulding). Then there’s the specific curing time for the resin used, which can be from 15 minutes to a couple of hours. Most of the systems I use are about 45 min cure.

Workshopshed: What is the life of a mould, how many times can they be used?

Brian Dainty: It depends on the complexity of the part, the finish and the resin to be cast. A difficult component cast in an aggressive resin (like a glass filled nylon simulant) can reduce the mould life to 15 parts, but I have a tool which is used to make a soft rubber component that has done more than fifty shots without failure. There is a finite life to moulds, unfortunately. Moulds can be replicated though. You have a set of master moulds from which you can make multiple sets of secondaries. This is great for repeated batch work. And moulds don’t age, as some may think. I read a tweet today about this and immediately went and cast a tool which I made 13 years ago. It was fine.

Workshopshed: You mention making a master pattern with a 3D printer, what else can a pattern be made from?

Brian Dainty: There are some materials which react badly with the translucent Silicone rubber generally used to make moulds, but a barrier coat of paint stops most issues, so most of the regular modelling plastics and metals are fine, as well as fillers and glue. A poorly fabricated model will not usually survive the moulding process, as the Silicone is drawn into the smallest gaps and therefore grips the model very well, making its removal potentially difficult. Obviously this doesn’t matter as you now have a nice shiny mould to cast a new one from.

Workshopshed: Talk me through the evolution of the FZero1 vacuum casting machine, how long did it take you to get this far?

Brian Dainty: I left my last job to work for myself (again) in 2008. At the time I was mad keen to build and sell machines and got a little way with it, before the reality of making a living got in the way!

The idea of a small casting machine came to me last summer and I started designing it immediately. It was after showing the concept to my sister and her husband that they offered to back the venture and act as business advisors. They know I am good at making things, but bad at business! They set up the company and the prototype was started in September. Work is nearing completion and I have added extra functions to the electronics as well as designing an extension mould chamber for the smaller machine.

Workshopshed: What kind of workshop do you do your product development in?

Brian Dainty: My workshop is 6Mx5M concrete block, built by me 20 odd years ago. I have an eclectic assortment of machines and tools. I was trained as an industrial modelmaker, so nothing is out of bounds for me.

I have a Boxford 41/2″ lathe, a Warco mill/drill 12″ disc sander, bandsaw, belt sander, spray booth, obviously the VC machine and oven, silversmithing bench, polisher/grinder, table saw, routers, all kinds of hand tools. Almost everything I ever wanted. I would still like to own a CNC mill and lathe, and a laser engraver. I have access to both of these and a large 3D printer via my previous employer, until Santa brings me one. 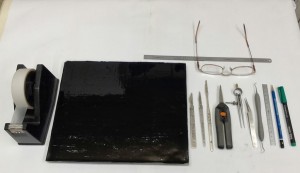 Workshopshed: I see you’ve made your own specialist mould opening pliers (MOP), are other tools or skills needed?

Brian Dainty: The MOP’s are brilliant for what they do and it is a specialist operation to be sure, but not difficult at all. I’ve trained a few people to make VC moulds and cast. It’s easier if you have an understanding of engineering or at least know how things work, other than that it can be done with very little equipment. Attached is a photo showing the tools I use to set up a mould. The Silicone mat is used to keep the tape sticky whilst it is cut to shape and the dental tool is for rubbing the tape down. Scales for weighing, bucket for mixing and a mixer of some kind. Not much really.

Brian Dainty: I will be making lots of videos. Both for training purposes and to show what VC can do. Instead of using arbitrary parts as examples though, I will be showing the making of replica movie props, the Alien’s films to be specific, as the subjects. Many years ago I got into this and produced some very well received props. This time I have advisors, so as a side project I will resurrect the prop business, showing the process of vac casting them and then selling the parts on the website. Two birds, one stone if I’m lucky!

One thing about the (FZero1) machine which is important to me; the name. The “F” is actually for my father Frank, gone almost 35 years now. I wanted to put a little bit of him into the machine, he would’ve loved it. 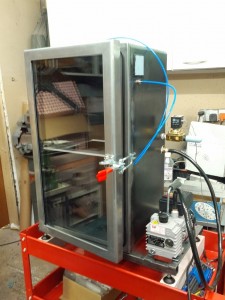 Workshopshed: Thanks Brian for agreeing to be interviewed and telling us about this great process, machine and tools.

Brian Dainty: I have a saying which I use regularly: knowledge is freely given. I hold by this idea. If anyone wants to know more they just need to ask.