When designing the chassis for the Topsy Turvy Clock I needed to think about how the components would fit on the brass sheet but also how I would go about marking out. Typically when dimensioning a diagram you use a known point or datum and take all the measurements from there, often this is one corner of your work piece. 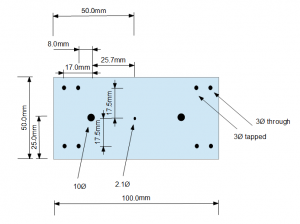 Given that the most important part of the clock is the middle where the hands will come out to the face, I decided to use that for my datum. It’s also simple to locate this point by using a ruler to mark the two diagonals, where these meet is the centre. 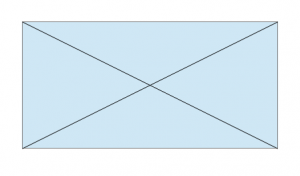 The next most important points are those of the motor spindles. These need to be exactly 25.7mm from the centre so that the gears mesh correctly. These are also on the centre line. I decided to use these second points to mark all of the other dimensions. I also thought that having the mounting holes for the motors in line with the mounting holes for the two chassis plates would look best. I had the motor mounting details from a data sheet for the 28BYJ-48.

After cutting and filing square two 100mm x 50mm sheets of brass, I used permanant marker to “blue” the areas where I’d be marking holes. I then used a scribe and ruler to locate the centre as described above. A centre line was drawn using a square aligned with the centre hole. The motor holes were then marked by measuring along that line. Another line was drawn perpendicular to this through the motor axis and the distance to the mounting holes was measured and marked. The last construction line was the horizontal for the mounting holes and finally the two mounting holes were measured and marked on that.

Unfortunately when I was centre punching the holes I forgot that one point was just a construction point and those got punched too. So I cleaned off the blue with some acetone and then just crossed the correct holes so it would be more obvious when I was drilling. I started marking out the second sheet but decided that I’d spot through the mounting holes and hole for the hands and hence they did not need marking.