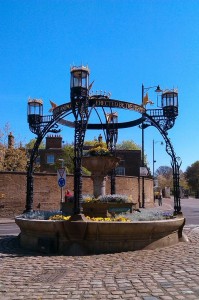 Around to top is a banner stating “Erected by the Royal Society of Prevention of Cruelty to Animals”. There are some lovely details such as a heraldic griffins and octagonal lantern on each of the supports. 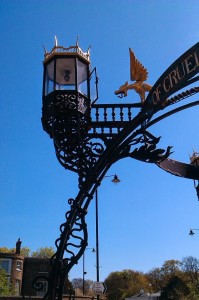 I was intrigued and stopped off at the Richmond Local Studies Collection to find out more. A check on a series of maps showed that it had been there for a long time. We also uncovered an article from 1994 by Peter Locke of the Richmond Society to help fund raise for its restoration. This confirmed that it was a fountain designed by architect T.E.Collcutt in 1891. If you look closely behind the flowers you can see the original spouts that would have provided the water for horses and cattle to drink. 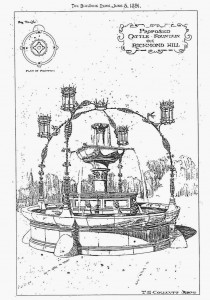 It was commissioned on 30th July 1892 which was reported in the Richmond and Twickenham Times the following weekend. London Gardens Online states that it was restored for the Coronation in 1937. 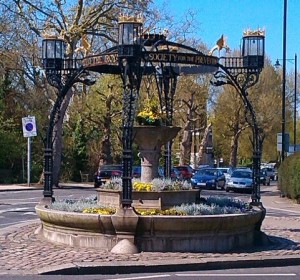 The Richmond Society’s 1993 appeal, raised £1,125 for re-gilding of the dragons, inscription, knobs of the coronet, finials of lanterns and red enamel paint to the dragons’ tongues. The Council paid for the rest of the iron canopy to be painted in black, and commissioned all the work.

There was never any prospect of reinstating the fountain/drinking trough, as the Council did not want to commit to long term maintenance.

Although the gilding and enamelling has lasted well, the canopy is suffering from serious corrosion. The Richmond Society has been fundraising again, and hope that work to save this delightful and most unusual structure can begin before too long. The fountain is a Grade Two Listed Structure so any repairs or changes need Listed Building Consent.

One thought on “RSPCA Fountain”