“All children, except one, grow up. They soon know that they will grow up.”
― J.M. Barrie, Peter Pan

Likewise, all toys will eventually become too small or too childish for their owner.

A few years ago, I purchased a wooden ride on trike and trailer from the Early Learning Centre. The trike was well used but frequently left out in the garden, the trailer stayed inside and was rarely played with.

The net result was that the trailer is in excellent condition but the trike is not. 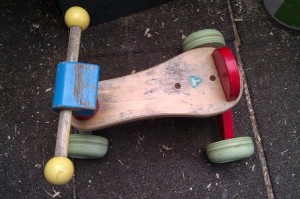 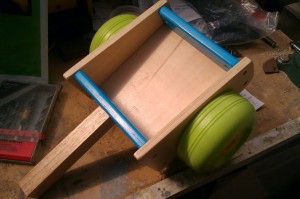 I did contemplate buying a couple of tester pots of paint and re-painting it myself. Instead I decided to split them and pass the trike on via Freegle. This meant that the trailer did not have anything to hitch to.

My solution was to turn it into a wheelbarrow by adding a couple of handles. A double ended screw would have worked well but not wanting to have pointed bits hiding under the surface I needed to come up with a different solution. 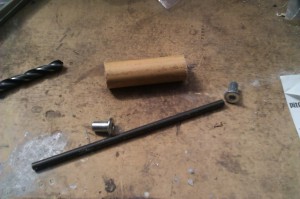 For the handle I found some old curtain pole. To mount to the handle I used a steel rod, reclaimed many years ago from a circular drier. I had some hex socket case nuts which I think came off some old furniture which made very good ends for this and matched the style of the other hex socket nuts already used.

To drill the handles I lashed up an arrangement with a V-Block and some welding clamps. This did not work for two reasons. Firstly there was not enough height or movement on my pillar drill to get all the way through the bar. Secondly the clamps did not provide sufficient holding force. I think I would have been better putting the curtain pole in a vice and using the hand drill. Once I had a hole for the rod, I counterbored a larger hole for the case nuts.

The rod was just cut to length with a hacksaw and I filled the ends of the rod so that the was a better size for threading and had a bit of a taper. A 5mm die was used to thread the rod. Finally, I drilled a hole through the handle and assembled the components. The design means that it can be easily reverted back to it’s previous form. 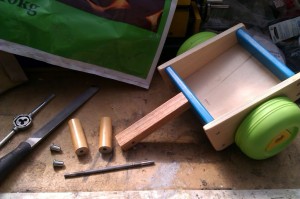 It’s good to breath some new life into an old toy and I hope in it’s new format this wheelbarrow will get more use than it did as a trailer. 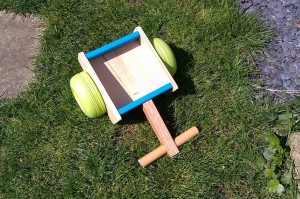