Late last year I was watching a kids TV show and spotted a rather unusual clock, it was a simple mantel clock but the numbers were in topsy turvy locations. I wondered if I could make such a clock and make it tell the right time.

There have been some challenges along the way and the software still needs some some fine tuning but the clock is working and it is possible to use it to tell the time.

I’ve entered the clock in the Simply AVR Design Contest so if you like the clock please find it in the gallery and press the vote button.

The clock uses a microcontroller along with a Real Time Clock module and some driver arrays to control two stepper motors. These are connected to the hands via some plastic gears and concentric shafts. 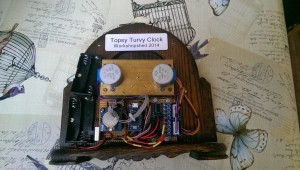 The position of the hands is detected using disks with one shaded segment which pass through slotted opto sensors. This allows the software to “home” the motors when the clock starts up. The hands are then moved to the right time. 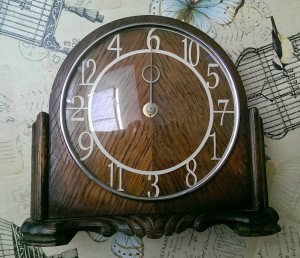 Despite looking deceptively simple from the front it’s been quite a challenging build.

I wanted to ensure the Topsy Turvy Clock looked like an actual old mantel clock. The numbers on the face were laser cut but they were picked in an antique white colour to make it look like those were the origional numbers. I also wanted a contrast between the mechanism and electronics so to make it look old that was all made in brass. The shafts for the mechanism took a couple of attempts and making the hands press fit on the ends of those was challenging. I added a dab of superglue just to keep them secure.

The software is the key to making the whole solution work. I could not have done it without the people who made the various libraries and frameworks but I was also cursing them several times during the build. I’d like to make the clock auto adjust for British Summer time and make the LED on the back flash once a second so there will be some further software updates and I need to monitor how the clock works over a longer period.

Details of the build
Source Code

Don’t forget to vote for the clock at the Simply AVR Design Contest.