Life in London is tough, especially if you are a shower. Due to some unique geology, all of London is a hard water area. This means that we have minerals dissolved in the water which it makes it taste nice but it’s not good for your plumbing. Over time kettles, boilers and valves all start to get furred up with limescale. If you left a drip long enough you could have a stalactite hanging from your pipe. 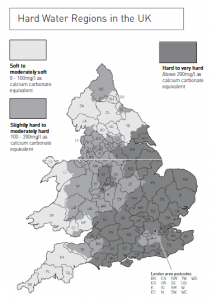 And so it was with our shower, the levers started to get stiff and it was difficult to turn off. After finding the manual on the net, I read that the thermostatic cartridge is designed to be taken out and descaled. The manufacturer recommends every three years and the shower was installed four years ago.

After shutting off the water, taking the shower apart was fairly straight forward. Even so I took notes of the steps which were vague in the manual. The job involved some circlip pliers (purchased from the cornershop), a cross head screw driver, a replacement O-Ring from our local plumbers shop, and some silicon grease which we got from the garage shop after the plumbers shop did not have any. The O-Ring was to replace one that looked a bit frayed. Also I needed a 30mm spanner to unscrew the cartridge.

My wrench did not go that wide and I did not really want to buy a new one just for this job so I set about making a spanner.

I found a suitable piece of 3mm x 30mm mild steel. Using a square and ruler I marked 3 parallel lines spaced at 15mm apart. Then using a protractor I drew a line at 30 degree joining up with the middle line. Flipping the protractor I then joined them with another 30 degree line.

It was then a case of carefully sawing on the inside of the lines and filing down to form a half hexagon. 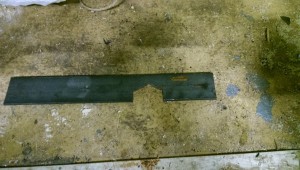 I did make sure the nut was to hand when doing this to ensure a snug fit. Then with the help of a few taps of the hammer I loosed the cartridge enough to unscrew it.

Be warned if you are doing this as there is a big spring in the back and you don’t want to loose any parts as it flush open showering pieces everywhere. Luckily I had an exploded diagram of the shower so I knew what order to put the bits back in. Even if you do have one of these it might be worth photographing each step to see how things fit together. 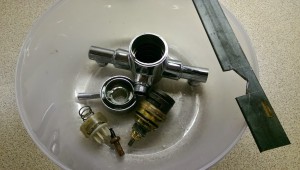 After a soak in vinegar and a quick spray of grease the shower was put back together. The last step was to ensure the temperature stop is in the right place and to turn the supply back on.