For the Enchanted Cottage project I decided to make the mechanism for moving the figures using a 3D printer.

I thought that ABS plastic would be a good material as the parts would be light weight and by printing them I could fine tune the design as I went along.

As the parts needed to move in respect to each other I needed a way of joining them. My first idea was to have a springy clip. 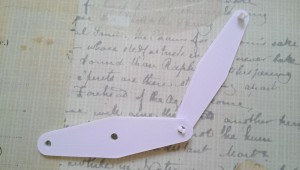 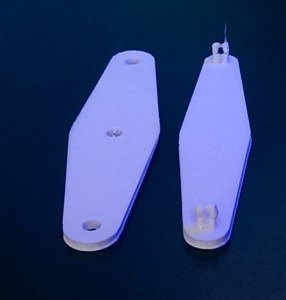 There were a couple of issues with this approach. Firstly the tiny clips were problematic to print, I might have persevered with that had it not been for the second issue. The clips were also easily broken, this was because the bending force on them was in line with the laminations of the 3D print.

My solution to both of these issues was to use bigger holes and pins to connect the parts. The joints were held together with a self tapping screw which also provides additional strength to the pin. When printing the pins I used the facility in Automaker to slow down and printed them at half speed. This composite design also allowed me to smooth the pins and holes with sandpaper before assembly. 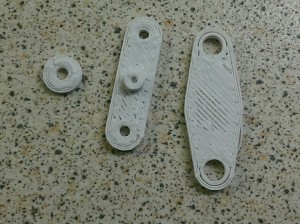 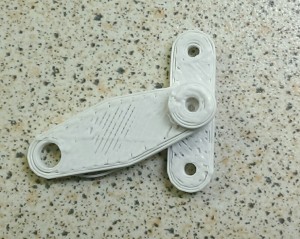 Conveniently I found a large number of tiny self tapping screws that I had salvaged over the years from old computer parts. As I was using screws for the joints I also decided to use screws to attach the mechanics to the wooden frame. For this I designed small 3mm diameter holes into the mounting parts.

When printing these parts the software first instructs the printer to draw the outline of the holes then the outline of the part and finally it fills in, in between. As the print head tried to draw the small circles on the bed the angle was too great and the movement of the head pulled the filament back off leaving a little bundle of filament wrapped around the nozzle. This in turn caused more problems when it tried to print the next part.

My solution was to stop the holes short of the surface. This means that the printer first prints the outline, then fills it in, then on the next layer it starts to draw the holes.

This version of the design printed reliably and I used a sharp bradawl to punch through the holes. 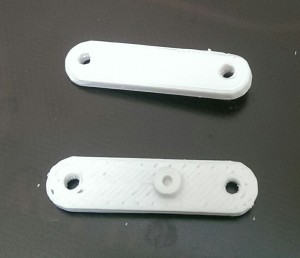 I do like the simplicity of the clip together version so I may revisit that in the future if I have a larger design that can use them.