The magnifier lamp has 24 LEDs and the housing is plastic so I did not want to solder them up in place. To simplify the assembly a wooden jig was made by drilling 3 hole through the head. An LED was fitting into the head and the legs bent at the right point. 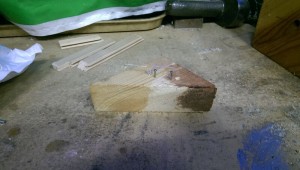 A couple of panel pins were hammered in to act as depth stops. 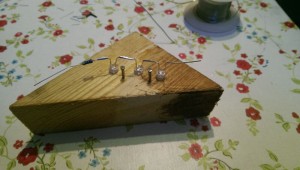 This allowed sets of 3 LEDs to be formed, cut and soldered with a resistor and wires. 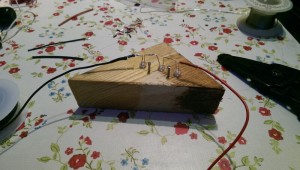 8 sets of LEDs were soldered up and then wired up. To reduce the amount of cable in the head, every three sets the wires were consolidated into a single cable. These were finally brought to 2 points that could be connected up to the supply. 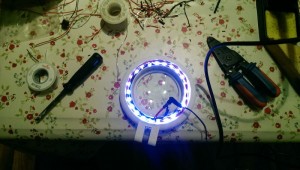 These were tested as I went along and then again once they were all connected. I have some flexible multimeter cables to connect up to the base.

One thought on “LED Jig”