One of the people I was really looking forward to meet at the faire was Mario the Magician, I’d seen him on film via a documentary and already knew he was a great maker and performer. He did not disappoint, he really worked the crowd during his performance and the quirky behaviour of the animatronic monkey, card machine and hat made it very easy to suspend disbelief and laugh along with the kids. Having seen inside Marcel the monkey it’s hard to see how all the mechanics fit but there are servos to move both the arms and head in multiple axis as well as electronics and sensors to control everything. Equally impressive animatronics was “The Wizard of Fun”, this talking puppet was built by Steven Hanania and has motion tracking, lip sync and full movement for the head and eyes. Steven also brought along some other mechanisms and puppets. 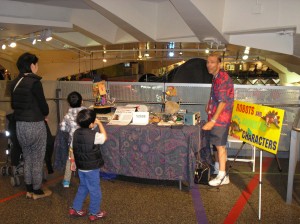 I also saw this puppet but have no idea who he was and why he was there… If you have any idea then let me know. 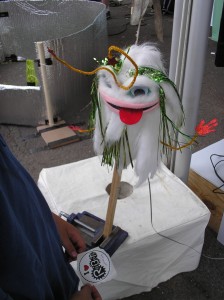 The Gamelatron was intentionally sited away from the rest of the faire. It was up on the second floor outside at the back. This allowed the music to be heard in a tranquil setting. The sculpture by Aaron Taylor Kuffner is a set of percussive instruments hit by mallets and controlled by a custom midi solution. 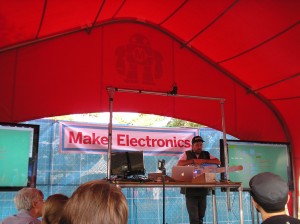 Also designing custom midi instruments was Nick Demopoulos who demonstrated his Smomid and explained how it was designed and created. The instrument is played like a guitar using linear resistive controlled attached to an Arduino. A range of knobs and switches allow beats, samples and algorithmic based sounds to be controlled and triggered. 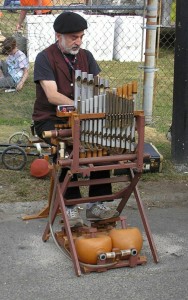 Len Solomon’s miniature pipe organ is much more low tech and involves plumbing parts and coat-hanger wire but it puts out a fabulous sound.

There were a number of other musical projects including the fire organ, a cardboard drum kit and at least two robots drum kits run by ardiunos.

The Zegobeast team challenged themselves to build some walking mechanical legs based on Theo Jansen Strandbeest linkage. They no only completed their large sized version but also had finished a smaller one too by the end of Sunday. 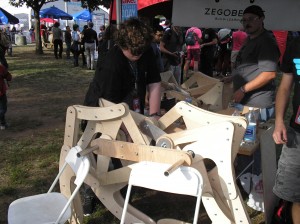 Their music had an old world feel to it but was also hooked up to oscilloscopes so we could see the wave forms. They also had some games such as this dual screen video pinball machine and a two person electro-mechanical ball shooting game.