The Enchanted Cottage is having a bit of a revisit this month, it was entered in the Proto-Pic Twitter IoT competition and won a £20 gift token. 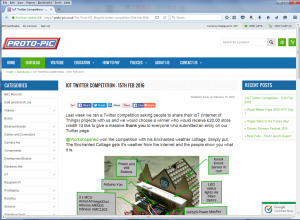 It’s also being showcased a the London Arduino meetup event later in the week, where I’ll give a quick 10 minute talk on the enchanted objects competition and the project.

Join us for an evening of lightning talks, show & tell, mentoring and networking.Bring your projects to get support during 1-on-1 mentoring sessions with our expertsNote that you also need to sign up via Skillsmatter to attend: :https://skillsmatter.com/meetups/7809-london-arduino-meetup-talks-show-and-tell-and-mentoring-sessions#overviewSpeake…

Check out this Meetup →