Casting a flywheel – Patterns in the sand

This year my main project is to build a small stirling engine, a project that’s been bubbling away since 2011. I decided to make a few customisations to Jan Ridders plans, one of these is to use a cast aluminium flywheel. A pattern is used to form an impression in sand and molten metal is then pored into that impression to make the casting. I’d already worked with a couple of people to design and create a 3D printed pattern. This is formed from two parts so that the sand can be packed around it and so that it can be removed from the mould. 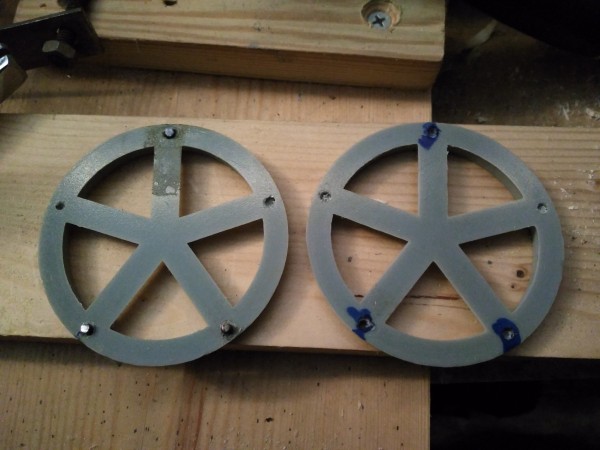 I used some welding rods as pins to align the two halves of the pattern. The short pieces were heated and pushed into the pattern so that the parts would clip together.

I’ve been watching a few of the videos from Myford Boy and he recommended an increased height to the runner (the tube that fills the mold) to reduce the risk of cold shunts; when metal does not make it to all parts of the cast.

So I prepared a section of tubing made from an old welding gas canister to act as the runner. I also found some plastic tubing to form the runner and riser. My two part casting flask is made from simple frames made from wood with some pegs to ensure alignment. Some old estate agent board was cut up to provide support for the sand whilst it is being prepared. Also shown in the picture is a trowel for moving the sand. Not shown are; a pot of talcum powder, a soft bristled brush for removing sand and talc, and a wood batten for tamping down the sand.

Although I used home made green sand for my early experiments, I moved to petrobond and found that to give good results.

The process starts with the drag flipped over on a board. The half of the flywheel with holes is placed join downwards on the board. Sand is sprinkled over it and then the drag is filled up and rammed down so that it is secure in the flask. A second board is placed on the top so that it can be flipped over. The second part of the pattern is clipped in, and the cope part of the flask. This is sprinkled with talc to help with the parting of the two halves later. The top is levelled off and the two tubes removed. The extended runner was then rammed up using the welding canister and the bigger tube. Once everything was ready, I carefully removed the cope (top box) and placed it to one side. A gate (channel to flow metal into the mold) was cut in the sand. 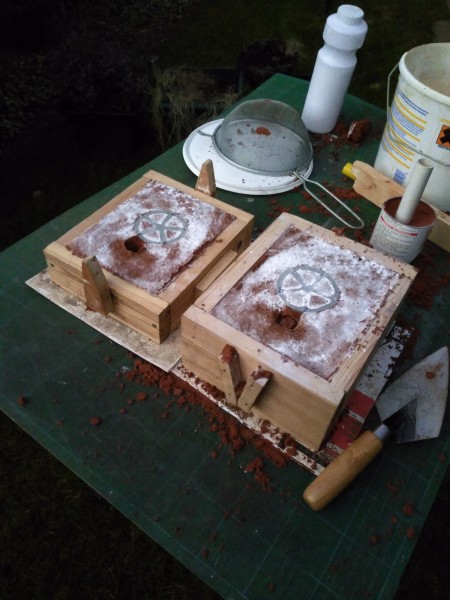 The patterns were tapped to loosen them and carefully removed. The soft brush was used to remove any sand or talc that had fallen in. The box was put back together and the extended riser placed on top.

Next part we’ll look at the melting and casting processes.

One thought on “Casting a flywheel – Patterns in the sand”