The last part of the Dragon Detector project was to put it all together and box it up. I had planned to make a 3D printed figure with a servo operated arm, however I knew that would take time so I asked Rob Ives to help. He had a cardboard knight figure that turned out to be just perfect for the project. 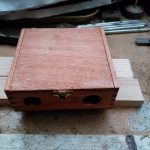 I selected a small cedar box that used to hold cigars. You can pick these up at most good cigar shops in return for a charity donation, although they may become rarer now that the plain packaging laws have been passed.
A palm sander was used to remove the embossed branding from the box and then a coat of Danish oil to restore the finish. 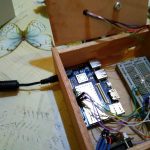 Cedar is a hardwood and is fairly easy to work with hand and power tools. It is however quite brittle so avoid using too much force to avoid splitting.
When drilling the front and sides I had a problem with breaking out, i.e. when the drill comes out the back it takes a big flake of wood with it. Retrospectively I could have reduced this by clamping a piece of scrap wood to the back to support the material. I glued the parts back together and tidied up with a chisel. I also made an error with the hole for my power connector, forgetting to allow for the standoffs under the DragonBoard. Again, this was corrected with a small sharp chisel. 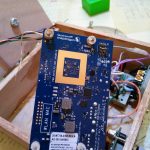 For the standoffs, I used some hardwood dowel as the only ready made standoffs I had, had too large screws. These were simply hot glued into the box.

The IR module was a good fit in it’s hole so was simply pushed into place. The breadboard used for the level shifters was held in place with double sided tape. 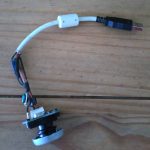 The web cam was removed from it’s plastic housing so it could fit in the case but came with a 2m long USB cable that would not fit in the box. I quizzed the Element14 members that chopping this would not be a problem and they confirmed that to be the case. The cable was shortened and rejoined. Normally I’d avoid a join but I did not have a way to redo the connector so this seemed the best option. I successfully tested the shortened camera using my desktop computer. 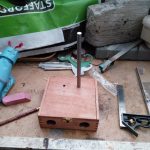 To mount the figure on the top, I drilled a hole under each foot. This time to avoid breakout I drilled a small pilot hole and then drilled the main hole from each side to the middle. One hole was for the wires and the other a support. This support was made from a bar that was part of a jewellery tree that I picked up from Ikea’s scrap bin for just 30p. It was cut to length and the top wrapped with tape to avoid shorts. 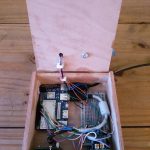 I used the spare wire from the webcam to wire up the RGB LEDs. I included inline 220ohm resistors in the wiring as that made the onboard wiring simpler. The LEDs were hot glued into the head of a cardboard model knight made by Rob Ives and the wires fed down one leg. Some cable clips were added so that the lid could be opened without putting strain on the connections.
A dragon was made by printing a clipart image with it’s mirror and sticking the paper to each side of a piece of ply. The dragon was cutout with a coping saw and glued to a small block and strip so it could be easily moved.
Finally the system was all tested and the software modules put together to make a working solution. The following video was made for my competition entry.