I was sent a Spring Tools centre punch and nail set by Phil Gregson of Chicago Brand UK Ltd. I suggested a comparison of the spring centre punch versus the other centre punches I had to hand. The following is a product review rather than a sponsored post so all the opinions are my own.

For those who are not familiar with the idea, a centre punch makes a small hole which reduces the chances of slipping when drilling metals. You can also use them to mark the position of holes or corners when marking out although often a sharper point is used for that, called a “prick punch”. You can use a centre punch with some malleable plastics such as ABS or Nylon. Many plastics will crack or shatter rather than mark. Because of the risk of shattering or splintering it is advised to wear goggles when using punch tools. 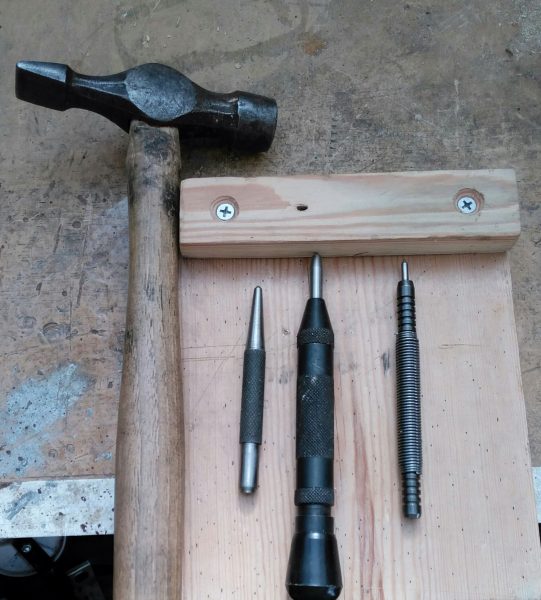 Most of my centre punching is done using a manual punch that I made during my time as an apprentice at Dowty. I also have an automatic punch from Axminster which works by pressing down on the metal which triggers an internal spring to fire, that’s the big one in the middle. The spring punch is on the right and is just a bit bigger than my manual punch.

For my testing I used strips of brass, mild steel, aluminium and made three spots with each. I’m reasonably practised with a manual punch, but you have to hit it squarely and consistently to get a good and accurate result. The automatic punch works with an internal spring, you push it down until it clicks and it triggers the punch. You can change the force with a rotating adjustor. There are a couple of issues with the automatic punch, firstly there’s no indication on how hard it’s going to hit and the second is the size makes it harder to position. Note that you can get smaller automatic punches. You can supposedly use them with one hand but I often find myself pushing down with both. I typically only use this punch on harder materials and normally go for the convenience of the manual punch.

The Spring Tools punch works using a spring as the name would suggest. So you don’t need a hammer to use it. It works by you pulling on the sprung end and letting go. It made good marks on all three materials and was straight forward to use. If you look carefully at the middle bar you will see one of my holes is out of line with the others. I believe this is due to over pulling. I did some experiments and if you pull too hard then the tip will lift and wander, this is particularly the case with polished surfaces. However, even on the steel bar you really don’t have to pull the spring hard to get a good mark. I did a practice run along the other side of the strip and quickly was getting accurate and consistent results. 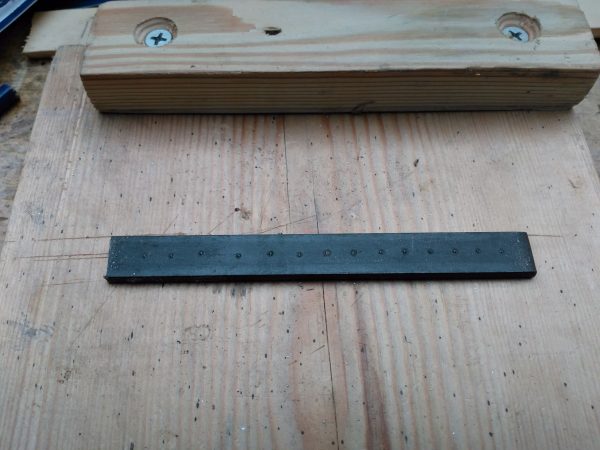 Craig Semmens a toolmaker from the West Midlands suggested I try the punch on tool steel, that was also no problem. I foolishly tried the punch on a hardened block of HSS. Although it marked the metal it also flattened the tip so a quick trip to the grinder was needed to get it back in working order. Up until that point the tip was doing well with no signs of wear. Looking at the price of the tool, it’s currently £14.95 when bought directly but if you look there are several of the tools that are double ended and hence better value for money. This is quite a bit more than a manual or automatic punch but not excessive.

In summary, I think the Spring Tools centre punch is a good tool, it does the job it’s intended for. For ease of use and convenience I’d rate it better than the other two punches. It’s also as accurate as the manual punch. My only negative is that it is a different technique so you do need to practice a little, particularly for harder metals. I see this as a great addition to the DIYers’ toolbox or handy around a jobsite as you don’t need to have a hammer on hand.

How the Spring Tools are made

You might have spotted that I did not mention the nail set. That will have to wait to a separate review as I don’t have anything needing nailing at the moment.

One thought on “Spring punch”