There was lots of positive feedback from the previous post on top women makers. Before we get into the details, I thought it worth mentioning that there is no kind of order to the list, the makers were just split into 2 parts based on the order I did the research. Thanks everyone for all the nominations too, it’s pushed few makers into a 3rd post but that can only be a good thing!

Maker of things (Alfred Chow) and Frederick Vandenbosch both recommend the first maker on part 2 of my list, April Wilkerson. Alfred noted her determination to make things even though she starts out without the skills required. She teaches herself as she works through her projects and hence is great role-model to all those who are starting out with making. 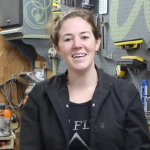 “I am an obsessed DIYer and Woodworker. I’m not professional or have any training, so I just pick the project I want to tackle and figure it out step by step.”

April has a great selection of videos on both indoor and outdoor projects. There are projects for the home but also for the workshop with detailed explanations and quality results. 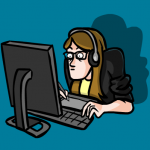 I know a lot of makers and other women hate being called girls but teenager Cerys does not seem to mind being called EU Digital Girl Of The Year 2016. She was awarded the prize for her work on promoting STEM topics. Cerys also builds robots and designs 3D prints, using the Raspberry Pi. 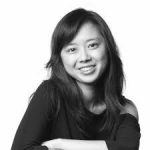 Haiyan recently appeared on the BigLifeFix and created an amazing anti-shake pen for Parkinson’s sufferers. This gadget can help people get use back in their hands and do drawing and writing again. 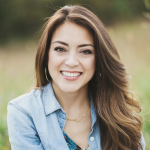 Jen popped up on my timeline this week for making a metal sconce by brazing a candle holder to a decorative plate. She’s now a brand ambassador for Bernzomatic. She’s built loads of great furniture projects from beds to tables, some retro, industrial and some more modern. There’s great use of 3D CAD in her posts to provide visualisations of the projects. 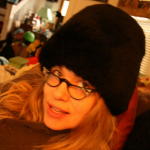 Trudy was nominated by Dark Matters. Trudy is a film art director, photographer and owns a vintage clothing store. So it took me a while to work out what she makes. It turns out that she makes her own yarn, hats and sweaters. A reminder that not everyone’s definition of maker is the same and around the edges between art, craft, engineering things are a bit fuzzy. 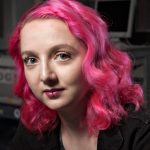 Zmo nominated Limor Fried. “She’s got a Phd in making-awesome-things!”

Limor is a Maker Pro, she’s the founder of electronics company Adafruit Industries and both a top engineer and smart business woman. My default reaction when needing a new circuit or module is to see if Adafruit has already made one. The same goes for instructions as Adafruit normally have the best documentation and examples on how to use things.