Until now my 3D printer has been living in it’s box in the corner of the kitchen. Which means it can only be used when the kitchen is not in use, when the noise won’t disturb anyone and when there’s a suitable computer plugged into it.

My plan to rectify this is to move it into the Workshopshed. Unfortunately this is not the best environment as it’s dusty (metal and sawdust), gets damp in the winter and has no computers.

To resolve the dust issue, the idea is that it can live in a cabinet made from some left over sheets of wood. I’ve some 6mm MDF from a bedhead project and some plywood. I decided to try TinkerCAD as an alternative to my preferred OpenSCAD to visualise how the case might fit into the space. Firstly, I created an outline representing the printer, allowing for the lid opening, getting the spool on and off and cables at the back. I then created an outline representing the space that it would fit into. Finally I added some fans (see next section) and some filament spools. I experimented with different shapes and sizes before coming to a suitable configuration. 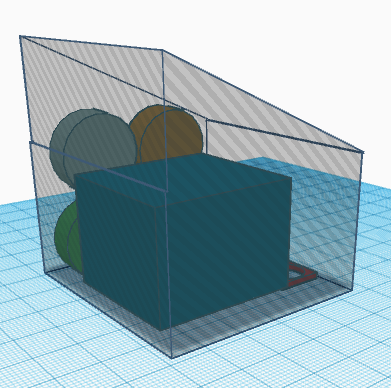 I hope to have a door that lifts up and then slides into the lid. If I’m feeling ambitious I might go for a tambour style roller top approach.

One Buy UK have sent me some workshop storage hooks to review, I’m hoping that I can use them to suspend the filament spools to the side of the case. I’ll post the results of my experiments shortly. 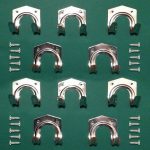 To solve the damp problem I hope to add a DIY dehumidifier. This will use a fan to blow the cold damp input air across a heatsink. The heatsink has been cooled by a peltier device and there is a catchment tray below the heatsink to catch any drops of water. The drier air then continues around a baffle and flows over a second heatsink where it is heated before being routed into the box. The whole arrangement will likely be controlled by a spare Arduino with a suitable humidity sensor such as a DHT22. There are quite a few technical challenges for this such as powering the peltier, controlling the fans and creating suitable ducting. The solution to my last problem is provided by “Root”. This is a remote control application for the Cel Robox that runs on a Raspberry Pi. I bought the software earlier in the year when Cel ran it’s Kickstarter campaign. I’ve also got a simple case printed for this which Robox and Element14 provided back in 2015. I will get myself a small webcam so that I don’t have to stay in the shed whilst it is printing.

The robox needs mains power and the Pi and Arduino run from a lower DC voltage. I’ve a selection of power supply options for those two. There will need to be some way of turning everything on and off from outside the cabinet.