How Can I Fix Broken Venetian Blinds?

A couple of years ago, I read a great article about Venetian blinds online and decided to equip my own home with them. Due to the fact that both of my first neighbors had two level homes, this allowed me to provide a bit more privacy (primarily in my living room), as well as control the level of natural light in the room (primarily in my bedroom). Since they were quite simple to install I didn’t bother contacting a handyman and went on to proceed with a DIY installation.

Not only was this a fun endeavor that boosted my own self-esteem as a homeowner, but it also helped me get off much cheaper. This confidence boost further encouraged me to try my hand in any future blinds repairs. Here are a few issues I had to resolve on my own, so far.

Before I even start listing the DIY repairs I have made over these past few years, it is vital that one knows all the parts that come into the Venetian blind. For those who did the installation on their own, this won’t be a problem. After all, blinds are much easier to install than awnings and plantation shutters.
To make the long story short, there are six parts that come into the Venetian blind: a top part, a bottom part, a tilt tube, a tape ladder, a tilt cord and a lift cord. With a few exceptions, no matter what part is being removed, it would be smart to simply bring it all down. While this idea may seem a bit counter-intuitive, this course of action actually saves you quite a bit of time. 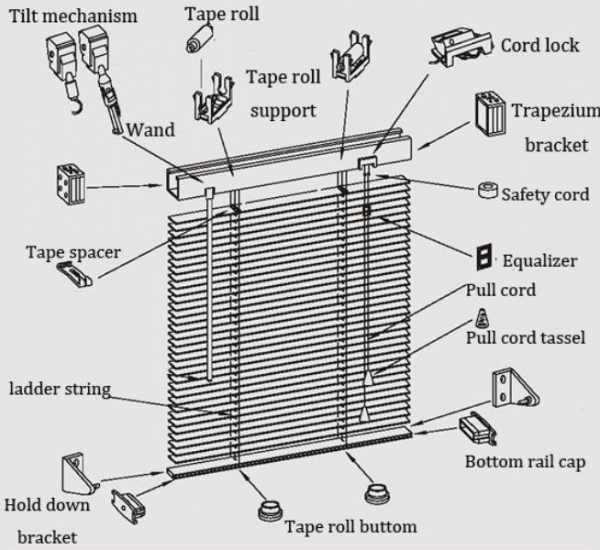 This particular issue is probably something that happens every several months to anyone who has Venetian blinds. Furthermore, seeing as how ridiculous this malfunction may seem a lot of people are simply too ashamed to call a handyman about this particular issue. Still, the repair, although fairly simple, does require you to remove the blinds from the window.
Next, you are to remove the clamps used to secure the cords and remove the old cords in order to replace them with some new ones. This is mostly because the old ones might become damaged due to the entanglement. Finally, in order to minimize the chance of this problem happening again, you should ensure that the distance between the slats is as even as possible (this, I learned this the hard way).

They won’t stay locked when raised

Another problem I encountered was the situation where the blinds refused to stay in the raised position. What I learned, however, is that these troubles almost always lead back to either cord or the cord lock. Most commonly, the traces of damage that are causing this problem are visible to the bare eye. The only thing you can do here to fix the situation removes the damaged part completely or simply clean it (if the piled up dirt is the thing that caused the problem).

In the previous section, we went to lengths to mention that piled dirt or dust may sometimes cause a malfunction, which is why keeping your blinds clean may be one of the most important things. One of the most interesting methods I’ve found consists of preparing the tub and then dipping blinds individually inside until they are clean enough. The most important part is to remember to dry them with a clean, dry cloth before you put them back.

Other Venetian blinds malfunctions I found people complaining of online were the situation where one slat won’t tilt correctly or a situation where it won’t release from the cord lock. Luckily, both of these problems can easily be solved as long as you know how to disassemble the blinds, remove the part and then put them back on. Furthermore, if you are proficient enough in their upkeep, the chances of them getting damaged on their own are quite low.